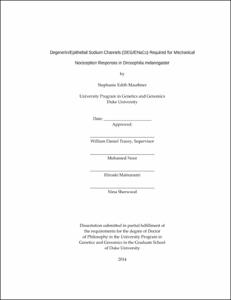 <italic>Drosophila</italic> larvae respond to potentially tissue-damaging stimuli with nocifensive escape locomotion (NEL). NEL is a stereotyped withdrawal behavior in which the larva rotates along its long-body axis in a "corkscrew" pattern distinct from normal locomotion and is triggered by noxious heat (>39°C) or noxious mechanical (>30mN) stimuli. The Class IV multidendritic (md) neurons are the polymodal nociceptors responsible for triggering NEL. Recent evidence suggests that the <italic>pickpocket</italic> (<italic>ppk</italic>) gene, a degenerin/epithelial sodium channel (DEG/ENaC) subunit, is involved in the mechanotransduction of these neurons. While removal of this ion channel diminishes the larval response to noxious mechanical force, it does not completely abolish it, which leads us to hypothesize that additional mechanical nociception channels have yet to be identified. To identify these channels, we carried out a tissue specific RNAi screen and knocked down all known and predicted ion channels in the larval Class IV md nociceptors. Knockdown animals for each channel subunit were tested for behavioral responses to noxious mechanical force or noxious heat. Taking this approach, two novel channel genes were specifically required for mechanical responses - we named them <italic>stallone</italic> and <italic>balboa</italic>. Remarkably, both genes are predicted to encode DEG/ENaC subunits and neither is required for optogenetic NEL responses, suggesting that both genes are required near the transduction step, perhaps forming a multimeric channel with PPK. Therefore, my research focused on demonstrating that these two DEG/ENaC genes, <italic>stallone</italic> and <italic>balboa</italic>, are required for mechanical nociception responses in <italic>Drosophila</italic> larvae.

Next I focused my efforts on the <italic>balboa</italic> gene as this locus encodes a DEG/ENaC ion channel subunit similar in amino acid sequence to PPK. Converging lines of evidence strongly support the hypothesis that Balboa and PPK physically interact and likely form a functional ion channel <italic> in vivo </italic>. First, both genes are functionally required for mechanical nociception. Second, both genes show very specific expression in the Class IV nociceptor neurons. Third, <italic>ppk</italic> expression causes a dramatic redistribution of Balboa::GFP fluorescence in the multidendritic neurons. Fourth, Balboa::GFP is altered by PPK knockdown and PPK::Venus is dramatically reduced by Balboa knockdown. Fifth, GFP is reconstituted by co-expression of <italic>balboa::CGFP</italic> and <italic>NGFP::ppk</italic> within neurons of the larval peripheral nervous system.

In summary, two DEG/ENaC genes, <italic>stallone</italic> and <italic>balboa</italic>, were discovered in an unbiased forward, genetic screen to identify genes required for mechanical nociception in <italic>Drosophila melanogaster </italic>. I demonstrated that <italic>stallone</italic> and <italic>balboa</italic> are specifically required for mechanical nociception behaviors documenting the first functional role of these two genes. The body of work outlined in this doctoral thesis has contributed to the overall field of mechanosensation by uncovering two novel genes encoding DEG/ENaCs that are functionally required for animal nociception responses to noxious mechanical force and may shed light on multimeric pain-sensing complexes.