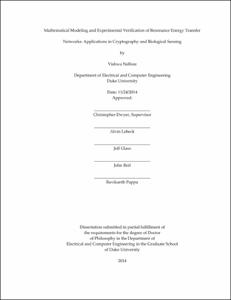 FRET between pairs of fluorophores is widely used as a biological assay. However, the properties of larger fluorophore networks are poorly understood and their application space has not yet been fully explored. This dissertation introduces DNA self-assembled FÖrster Resonance Energy Transfer (FRET) networks that provide a unique optical output when probed by a series of light pulses. We create a Markov model of the FRET networks and analyze over 1200 time-resolved fluorescence measurements on 300 prototypical networks. Our results show that the optical responses of FRET networks are highly repeatable and minor variations between the FRET networks can be discriminated resulting in a total of 10375 unique responses. These results are used in the following breakthrough applications:

Modern authentication protocols rely on an asymmetry in the effort required by a legitimate user and an adversary to accurately decrypt an encoded message. These protocols ensure that communication between legitimate users is possible in polynomial time using a private key but a user without access to the exact key cannot compute the function using a probabilistic polynomial-time algorithm. Private-key cryptographic techniques currently employ physical keys based on algorithmic one-way functions, which are conjectured mathematical objects that are easy to compute but difficult to invert. Well-known examples of such one-way functions include the RSA and the Rabin functions. Although algorithmic one-way functions are widely used for authentication, their reliance on computational difficulty to provide security implies that they are not protected against future advances in computational capacity or speed. Also, use of a highly parallel network of conventional computers could potentially reverse engineer a key from the challenge-response pairs used in past communications. The key may also be obtained by duplicating the device. Most of the current physical embodiments of algorithmic one-way functions come with a tamper resistant packaging but remain vulnerable to sophisticated attacks.

We develop a RET based physical key to overcome the limitations of conventional security keys. The key exploits resonance energy transfer between a network of fluorophores placed on a nanostructure. The fluorophores provide a unique, unpredictable output when probed by a series of light pulses of specific wavelengths and delays. A critical advantage of the RET key over existing keys is that the manufacturing process allows two identical devices to be produced allowing us to exploit the advantages of symmetric key encryption, for the first time, without the need to physically transfer the device between the two communicating parties.

It is infeasible to model, characterize or replicate our key using modern cryptographic attacks including unfettered physical access to the device. This is because of the difficulty in characterizing the nanoscale structure and the large number of challenge-response pairs achievable for each key. Atomic force microscopy and time -resolved fluorescence measurements are performed to characterize the nanoscale structures. From over 1200 measurements on 300 prototypical keys, we estimate that a legitimate user would have a computational advantage of 10340 years over an attacker even if the attacker uses all the computational resources available in the world. Thus, the computational advantage of our key ensures perfect theoretical security for the foreseeable future. We provide an authentication protocol for use of the key and demonstrate that legitimate users are successfully authenticated 99.48% of the time with two trials.

Fluorescence microscopy is one of the most widely used assays in biological systems. However, the technique suffers from limited multiplexing capability with previous attempts at detecting more than 11 fluorophores simultaneously resulting in barcodes that are too big for in vivo analysis, expensive and involve time-consuming detection schemes. Here, we introduce DNA self-assembled FRET networks that provide a unique, optical output when probed by a series of light pulses. Markov and entropy modeling of the nanoscale FRET sensors show that 125 fluorophores can be observed simultaneously. Furthermore, experimental analyses of over 1200 time-resolved fluorescence signatures show that the optical responses are repeatable 99.48% of the time and that minor variations between FRET networks can be discriminated resulting in a total of 10375 unique responses. This enormous increase in spatial information density enabled by FRET networks allowed us to identify molecular signatures in lung and breast cancer tumors.

It is now known that the presence of aberrant DNA/RNA secondary structure in the regulatory regions of genes involved in cell proliferation, cells growth and apoptosis can lead to cancer. The FRET sensor we designed, self-assembles DNA probes labeled with acceptor fluorophores to the target DNA/RNA secondary structure forming an optical network. A DNA strand labeled with a donor fluorophore triplex binds to a unique sequence adjacent to the secondary structure. When the donor fluorophore is excited, the optical network results in a different optical signal based on the presence of the wild-type or the aberrant secondary structure, through which we identified lung and breast cancer cells with high specificity and over 99.9% repeatability. The small size of fluorophores results in molecular scale spatial resolution while the optical sensing mechanism enables in vitro and in vivo characterization of the structure at picosecond resolution.