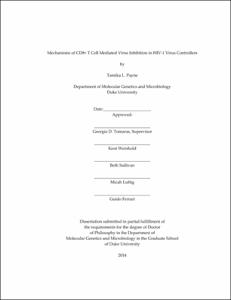 CD8+ T cells are associated with long term control of virus replication to low or undetectable levels in a population of HIV+ therapy-naïve individuals known as virus controllers (VCs; <5000 RNA copies/ml and CD4+ lymphocyte counts >400 cells/µl). These subjects' ability to control viremia in the absence of therapy makes them the gold standard for the type of CD8+ T-cell response that should be induced with a vaccine. Studying the regulation of CD8+ T cells responses in these VCs provides the opportunity to discover mechanisms of durable control of HIV-1. Previous research has shown that the CD8+ T cell population in VCs is heterogeneous in its ability to inhibit virus replication and distinct T cells are responsible for virus inhibition. Further defining both the functional properties and regulation of the specific features of the select CD8+ T cells responsible for potent control of viremia the in VCs would enable better evaluation of T cell-directed vaccine strategies and may inform the design of new therapies.

Here we discuss the progress made in elucidating the features and regulation of CD8+ T cell response in virus controllers. We first detail the development of assays to quantify CD8+ T cells' ability to inhibit virus replication. This includes the use of a multi-clade HIV-1 panel which can subsequently be used as a tool for evaluation of T cell directed vaccines. We used these assays to evaluate the CD8+ response among cohorts of HIV-1 seronegative, HIV-1 acutely infected, and HIV-1 chronically infected (both VC and chronic viremic) patients. Contact and soluble CD8+ T cell virus inhibition assays (VIAs) are able to distinguish these patient groups based on the presence and magnitude of the responses. When employed in conjunction with peptide stimulation, the soluble assay reveals peptide stimulation induces CD8+ T cell responses with a prevalence of Gag p24 and Nef specificity among the virus controllers tested. Given this prevalence, we aimed to determine the gene expression profile of Gag p24-, Nef-, and unstimulated CD8+ T cells. RNA was isolated from CD8+ T-cells from two virus controllers with strong virus inhibition and one seronegative donor after a 5.5 hour stimulation period then analyzed using the Illumina Human BeadChip platform (Duke Center for Human Genome Variation). Analysis revealed that 565 (242 Nef and 323 Gag) genes were differentially expressed in CD8+ T-cells that were able to inhibit virus replication compared to those that could not. We compared the differentially expressed genes to published data sets from other CD8+ T-cell effector function experiments focusing our analysis on the most recurring genes with immunological, gene regulatory, apoptotic or unknown functions. The most commonly identified gene in these studies was TNFRSF9. Using PCR in a larger cohort of virus controllers we confirmed the up-regulation of TNFRSF9 in Gag p24 and Nef-specific CD8+ T cell mediated virus inhibition. We also observed increase in the mRNA encoding antiviral cytokines macrophage inflammatory proteins (MIP-1&alpha;, MIP-1&alpha;P, MIP-1&beta;), interferon gamma (IFN-&gamma;), granulocyte-macrophage colony-stimulating factor (GM-CSF), and recently identified lymphotactin (XCL1).

Our previous work suggests the CD8+ T-cell response to HIV-1 can be regulated at the level of gene regulation. Because RNA abundance is modulated by transcription of new mRNAs and decay of new and existing RNA we aimed to evaluate the net rate of transcription and mRNA decay for the cytokines we identified as differentially regulated. To estimate rate of mRNA synthesis and decay, we stimulated isolated CD8+ T-cells with Gag p24 and Nef peptides adding 4-thiouridine (4SU) during the final hour of stimulation, allowing for separation of RNA made during the final hour of stimulation. Subsequent PCR of RNA isolated from these cells, allowed us to determine how much mRNA was made for our genes of interest during the final hour which we used to calculate rate of transcription. To assess if stimulation caused a change in RNA stability, we calculated the decay rates of these mRNA over time. In Gag p24 and Nef stimulated T cells , the abundance of the mRNA of many of the cytokines examined was dependent on changes in both transcription and mRNA decay with evidence for potential differences in the regulation of mRNA between Nef and Gag specific CD8+ T cells. The results were highly reproducible in that in one subject that was measured in three independent experiments the results were concordant.

This data suggests that mRNA stability, in addition to transcription, is key in regulating the direct anti-HIV-1 function of antigen-speci&#64257;c memory CD8+ T cells by enabling rapid recall of anti-HIV-1 effector functions, namely the production and increased stability of antiviral cytokines. We have started to uncover the mechanisms employed by CD8+ T cell subsets with antigen-speci&#64257;c anti-HIV-1 activity, in turn, enhancing our ability to inhibit virus replication by informing both cure strategies and HIV-1 vaccine designs that aim to reduce transmission and can aid in blocking HIV-1 acquisition.