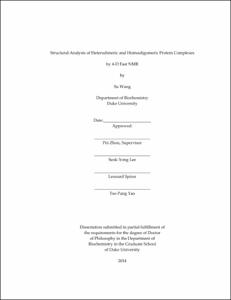 The benefit of such a strategy is first demonstrated in structural analysis of a homooligomeric protein complexes, the foldon trimer. We show that intermolecular NOEs collected from the 4-D omit NOE spectrum can be directly utilized for automated structural analysis of the foldon trimer by CYANA, whereas intermolecular NOEs derived from 3-D half-filtered NOE experiments failed to generate a converged structure under the same condition.

Such a strategy was further demonstrated on a heterodimeric protein complex in translesion sysnthesis (TLS), a DNA damage tolerance pathway. The TLS machinery consists of several translesion DNA polymerases that are recruited to the stalled replication fork in response to monoubiquitinated proliferating cell nuclear antigen (PCNA) in order to bypass DNA lesions encountered during genomic replication. The recruitment and assembly of translesion machinery is heavily dependent on ubiquitin-binding domains, including ubiquitin-binding motifs (UBMs) and ubiquitin-binding zinc fingers (UBZs) that are found in translesion DNA polymerases. Two conserved ubiquitin-binding motifs (UBM1 and UBM2) are found in the Y-family polymerase (Pol) &iota, both of which contribute to ubiquitin-mediated accumulation of Pol &iota during TLS. Although the Pol&iota UBM2-ubiquitin complex has been previous reported by our lab and others, the Pol &iota UBM1-ubiquitin complex has remained a challenge due to significant signal overlap in conventional 3-D NOE spectroscopy. In order to determine the molecular basis for ubiquitin recognition of Pol &iota, we solved the structures of human Pol &iota UBM1 and its complex with ubiquitin by 4-D fast NMR, revealing a signature helix-turn-helix motif that recognizes ubiquitin through an unconventional surface centered at L8 of ubiquitin. Importantly, the use of 4-D omit NOE spectroscopy unambiguously revealed an augmented ubiquitin binding interface that encompasses the C-terminal tail of UBM1.

4-D omit NOE spectroscopy was also used to study the Fanconi anemia associated protein 20 (FAAP20)-ubiquitin complex within the Fanconi Anemia (FA) complexes required for efficient repair of DNA interstrand crosslinks (ICLs), a process that is mediated by the ubiquitin-binding zinc finger (UBZ) domain of FAAP20. Unexpectedly, we show that the FAAP20-ubiquitin interaction extends beyond the compact UBZ module and is accompanied by transforming the disordered C-terminal tail of FAAP20 into a rigid &beta-loop, with the invariant C-terminal tryptophan (W180 of human FAAP20) emanating toward I44 of ubiquitin for enhanced binding. Accordingly, alanine substitution of the absolutely conserved C-terminal tryptophan residue of FAAP20 abolishes ubiquitin binding and impairs FA core complex-mediated ICL repair <italic>in vivo<italic>.