Haunted Borderland : The Politics on the Border War against China in post-Cold War Vietnam 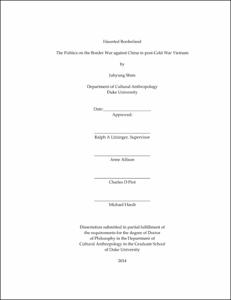 This dissertation deals with the history and memory of the Border War with China in contemporary Vietnam. Due to its particularity as a war between two neighboring socialist countries in Cold War Asia, the Border War has been a sensitive topic in Vietnam. While political sensitivity regarding the national past derives largely from the Party-State, the history and memory of the war has permeated Vietnamese society. The war's legacy can be seen in anti-China sentiments that, in the globalized neoliberal order, appear to be reviving alongside post-Cold War nationalism. The Border War against China represented an important nationalist turn for Vietnam. At the same time, the traumatic breakdown of the socialist fraternity cultivated anxiety over domestic and international relations. The recent territorial dispute over the South China Sea, between Vietnam and China, has recalled the history and memory of the war in 1979. The growing anti-China sentiment in Vietnam also interpellates the war as a near future.

As an anthropological approach to the history and memory of war, this dissertation addresses five primary questions: 1) how the historyscape of Vietnam's past has been shifted through politics on the Border War; 2) how the memoryscape involving the Border War has been configured as national and local experience; 3) how the Border War has shaped the politics of ethnic minorities in a border province; 4) why the borderscape in Vietnam constantly affects the politics of the nation-state in the globalized world order; and 5) why the border markets and trade activities have been a realm of competing instantiations of post-Cold War nationalism and global neoliberalism.

In order to tackle these questions, I conducted anthropological fieldwork in Lang Son, a northern border province and Ha Noi, the capital city of Vietnam from 2005 to 2012, and again briefly in 2014. A year of intensive fieldwork from 2008 to 2009 in Lang Son province paved the road to understanding the local history and local people's memory of the Border War in a contemporary social context. This long-term participant observation research in a sensitive border area allowed me to take a comprehensive view of how the memory of the Border War against China plays out in everyday life and affects the livelihood of the border's inhabitants. In Ha Noi, conducting archival research and discussing issues with Vietnamese scholars, I was able to broaden my understanding of Vietnamese national history and the socialist past. Because Vietnam is one of the countries with the fastest growing use of the Internet, I have also closely traced the emergence of on-line debates and the circulation of information over the Internet as a new form of social exchange in Vietnam.

As a conclusion, I suggest that memory and experience have situated Vietnam as a nation-state in a particular mode of post-Cold War nationalism, one which keeps recalling the memory of the Border War in the post-Cold War era. As the national border has been reconfigured by the legacy of war and by fluctuating border trade, the border challenges unbalanced bilateral relations in the neoliberal world order. The edge of the nation-state becomes the edge of neoliberalism in the contemporary world. The Vietnamese border region will continue to recall the horrors of nationalism and internationalism, through the imaginaries of socialist fraternity or in the practices off contemporary neoliberal multilateralism.