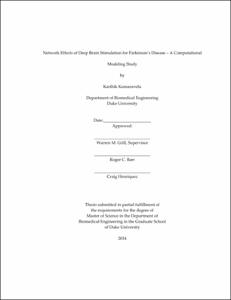 Electrical stimulation of the sub-cortical regions (basal ganglia) of the brain, also known as deep brain stimulation (DBS), is an effective treatment technique for neurological diseases such as Parkinson's disease and essential tremor. Chronic high frequency stimulation in the subthalamic nucleus (STN) or globus pallidus interna (GPi) reduces motor symptoms such as bradykinesia and tremor in patients with Parkinson's disease (PD). However, the therapeutic mechanisms of DBS are not fully understood despite its clinical benefits. We developed a biophysical network model comprising of the cortico-basal ganglia-thalamic circuit representing the healthy and parkinsonian rat brain. The network properties of the model were validated by comparing the responses evoked in different basal ganglia (BG) nuclei by cortical (CTX) stimulation to published experimental results. The key emergent property of the validated model was generation of beta oscillations in the CTX and STN-GPe network (independent of synaptic inputs) during PD and propagation of that oscillatory activity to the output nucleus of the BG (GPi). Consistent with their putative pathological role, beta oscillations in the model BG neurons were exaggerated in the parkinsonian compared to the healthy condition. We used the validated model to quantify the effectiveness of STN DBS at different frequencies in suppressing pathological beta oscillations in GPe. STN DBS frequencies less than 40 Hz were ineffective in suppressing GPe beta band power. GPe beta band power decreased gradually for stimulus frequencies between 50 Hz and 135 Hz, and saturated at frequencies higher than 135 Hz. High frequency (HF) STN DBS produced an increased excitatory response in a large number of GPe neurons and a subsequent reduction in pathological oscillatory activity. Further, HF STN DBS suppressed pathological oscillations in GPi both by exciting and inhibiting the firing in GPi neurons, and the number of GPi neurons affected was greater for HF stimulation than low frequency stimulation. Therefore, therapeutic HF STN DBS effectively suppresses pathological oscillations by influencing the activity of a greater proportion of neurons in the output nucleus of the BG.