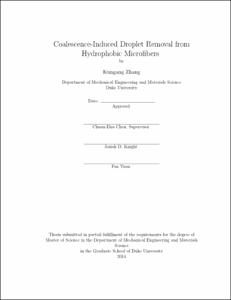 Fiber-based coalescers are widely used to accumulate droplets from aerosols and emulsions, where the accumulated droplets are typically removed by gravity or shear. This thesis investigate self-propelled removal of droplets from a hydrophobic fiber, where the surface energy released upon drop coalescence overcomes the drop-fiber adhesion toward the spontaneous departure. The self-propelled removal occurs above a threshold drop-to-fiber radius ratio, disrupting the power-law accumulation on a fibrous coalescer. The departure velocity approaches the capillary-inertial one at large radius ratios.

In experiments, the condensation process including self-propelled removal phenomenon was captured on Teflon-coated fibers with radius of 13~$mu$m and 40~$mu$m. The power law of condensation is obtained by plotting time and averaged radius of droplets condensed on fibers in 2-dimensional (2D) image at that time. Then, to better understand the mechanism resulting such self-propelled removal, droplet-pairs with equal size were manipulated on different radius of fibers (on cones with slowly varied radius). To simplify analysis, two droplets were aligned so that their center connection line was perpendicular to the axis of fiber. By using two high-speed cameras, two views of this removal process were captured simultaneously. Based on information obtained in those video-pairs, the velocity immediate after removal and drop-to-fiber radius ratio were extracted for every case. In plotting those velocity against the radius ratio, data-sets of different size of fibers were collapsed on a single curved, implying critical radius-ratio (at which the removal starts) and asymptotic removal velocity (when radius ratio is very large). In understanding the fluid field in this dynamic process, a 2D phase-field simulation were qualitatively compared with experimental observation, which help to explain why such self-propelled removal can happen on highly curved hydrophobic surface (micro-fiber), but not on flat hydrophobic surface. Understanding to this phenomenon can be useful in chemical industry, ventilation system, and oil separation, in all of which fibrous beds are used to separate aerosol from immiscible flow.