Baby on board: olfactory cues indicate pregnancy and fetal sex in a non-human primate. 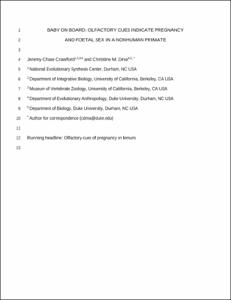 Earl D. McLean Professor
I have two broad research interests, sexual differentiation and social behavior, both focused on hyenas and primates. I am particularly interested in unusual species in which the females display a suite of masculinized characteristics, including male- like or exaggerated external genitalia and social dominance. The study of naturally occurring hormones in such unique mammals can reveal general processes of hormonal activity, expressed in genital morphology, reproductive development, and