The pains of government technology: An investigation into the rollout of Healthcare.gov 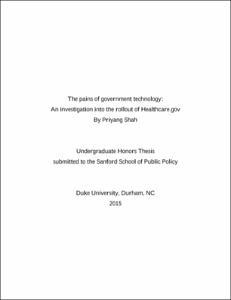 View / Download
1.2 Mb
Date
Author
Shah, Priyang
Repository Usage Stats
252
views
236
downloads
Abstract
Governments regularly rely on technology to implement policy. While technology development itself is normally not a part of legislative directives, it is an indispensable part of how laws play out in citizens’ lives. The integration of technology and policy, however, does not always go smoothly, a reality often borne out in the public media. The implementation of the landmark Patient Protection and Affordable Care Act through its web site Healthcare.gov is, arguably, one of the most important examples of this connection between federal policy, technology, and media. Unfortunately for the administration and its supporters, the website faced myriad issues from long wait-times to server errors that brought the historic legislation to a standstill. The media covered the event closely, employing a variety of viewpoints and methodologies that helped and hurt the administration’s efforts. This project looks into the media coverage surrounding the website four months before and two months after its initial rollout. While it does not explain the cause of difficulties plaguing the website, it does attempt to explain their portrayal. To this end, the project analyzes media coverage from the left and the right in online newspapers and televised broadcasts to understand what factors affected the tone of the media’s coverage. It finds that media ideology and subject matter shaped the tone of the coverage but in unexpected ways. External factors like Congressional hearings and the 2013 government shutdown may also have had an impact on the tone of the coverage. Clearer definitions and further research are needed here.
Description
Public Policy Honors Thesis of Highest Distinction
Type
Honors thesis
Department
Public Policy Studies
Subject
Healthcare.gov
Patient Protection and Affordable Care Act
Government Information Technology
Public Discourse
Media Analysis
Obamacare
Permalink
https://hdl.handle.net/10161/9531
Citation
Shah, Priyang (2015). The pains of government technology: An investigation into the rollout of Healthcare.gov. Honors thesis, Duke University. Retrieved from https://hdl.handle.net/10161/9531.
Collections
More Info
Show full item record