Women’s Land Rights and Empowerment: Impact of the Land Tenure Regularization Reform (LTR) on Contraceptive Use and Domestic Violence in Rwanda 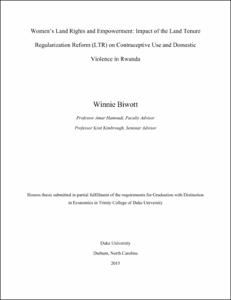 View / Download
1019.0 Kb
Date
Author
Biwott, Winnie
Repository Usage Stats
634
views
246
downloads
Abstract
The Rwandan Land Tenure Regularization reform (LTR) was implemented in 2007 to clarify land ownership in the country especially for women. Specifically, the reform enabled women in married unions to obtain joint titles with their partners as proof of land ownership. Using data from the 2010 Rwandan Demographic and Health Surveys (RDHS) and the LTR progress report, I investigate the potential effect the reform could have on women’s level of empowerment within the household. The underlying assumption for this study is that joint land titling will increase the bargaining power of the woman and consequently enhance her empowerment status. I explore three forms of empowerment, all of which tell an inconsistent story. LTR does not seem to have an overall effect on women’s use of modern contraceptives, perception and incidence of physical violence among them. However, LTR has a negative impact on incidence of sexual violence. In addition, LTR positively influences women landowners’ chances of using modern methods of contraception.
Type
Honors thesis
Department
Economics
Subject
Rwanda; Property rights; Project Evaluation; Household Behavior and Family Economics;Africa; Economic Development
Permalink
https://hdl.handle.net/10161/9586
Citation
Biwott, Winnie (2015). Women’s Land Rights and Empowerment: Impact of the Land Tenure Regularization Reform (LTR) on Contraceptive Use and Domestic Violence in Rwanda. Honors thesis, Duke University. Retrieved from https://hdl.handle.net/10161/9586.
Collections
More Info
Show full item record