Illegal Logging in Belize: Policy and Enforcement Mechanisms for a Sustainable Future 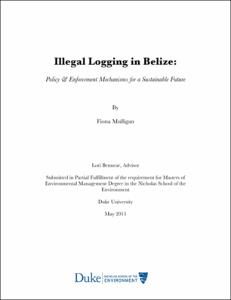 View / Download
1.4 Mb
Date
Author
Mulligan, Fiona
Repository Usage Stats
315
views
5,418
downloads
Abstract
Deforestation and forest degradation account for a major portion of Global Greenhouse Gas Emissions. Illegal logging accounts for the majority of all forests harvested in key tropical countries. While not widely publicized, the major Central American forests of Belize are of significant value to this industry and have proven incredibly vulnerable to illegal logging practices over recent years. Since the 1960’s, deforestation rates have continued to rise rapidly, due in large part to the expansion of citrus, banana, and sugar cane plantations. Rapid agricultural growth, coastal developments for tourism, and illegal logging for valuable hardwoods has led to an annual deforestation rate of approximately 2.3%, which is double the percentage of Central America as a whole. Should current deforestation rates continue unchecked, overall forest cover in Belize will decrease to 58% by 2020 and disappear entirely by 2050. This study recommends improvements for the Belizean forestry industry primarily through an economic and social examination of current forest management standards gathered through research and personal interviews with government, NGOs, and various stakeholders. Focusing on the illegal harvest of rosewood, cedar, and mahogany from Toledo and Chiqibul National Park over a period of two years, this study ultimately found that that the total value lost to the Belizean government due to the illegal harvesting hardwoods between 2010-2012 was roughly $USD 490,177. A relatively minor number, this is in fact representative of a much larger problem--this loss, calculated by estimates of what the government would have collected through the use of current taxation values-- is only 2.3% of the overall potential market value of the hardwoods exported during this time. That is, even if illegal logging were to be eliminated today, Belize is still failing to capture an adequate portion of the revenues from its natural resource. With a combined global market of approximately $ USD 21,488,144 and a nominal VAT of 5% with the addition of minor sums per board foot, Belize should be collecting significantly more than approximately half a million dollars worth of the total value, and is losing significant sums of money to foreign countries by failing to conduct and implement an appropriate monetary assessment and tax policy on their own high-value hardwoods. Ultimately, there are a number of potential recommendations necessary to address both illegal logging practices and the issue of high percentage monetary losses on outgoing hardwoods. In sum, Belize needs to implement a number of policy changes almost simultaneously. These include increased environmental enforcement mechanisms, a renewed economic assessment of timber products leaving the country, improved indigenous awareness and education, exploration of on-site processing plants, and the consideration of international initiatives such as ecosystem service payment plans that have the potential to help protect Belize’s forests as well as its people. While these may be instituted in stages, all are necessary if Belize is to create even a semblance of renewable resource from its forests.
Type
Master's project
Department
Nicholas School of the Environment and Earth Sciences
Subject
Belize, Illegal Logging, Central America, Forestry
Permalink
https://hdl.handle.net/10161/9591
Citation
Mulligan, Fiona (2015). Illegal Logging in Belize: Policy and Enforcement Mechanisms for a Sustainable Future. Master's project, Duke University. Retrieved from https://hdl.handle.net/10161/9591.
Collections
More Info
Show full item record