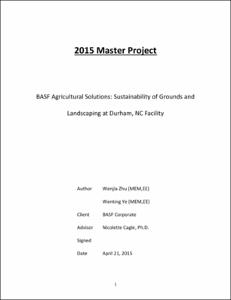 View / Download
1.1 Mb
Date
Authors
Zhu, Wenjia
Ye, Wenting
Advisor
Cagle, Nicolette
Repository Usage Stats
399
views
1,072
downloads
Abstract
The BASF Agricultural Solutions Headquarters occupies, the client of this project, has requested our team to examine the biological value, environmental value and economic value of its 100 acres corporate-owned forest which locates in Durham area as well as its storm water collection pond. There has been a significant construction project during the academic year 2013 and additional large projects are being considered for the near future. The goal of project is to help BASF conserve the natural aspects of the site in a manner that is consistent with its corporate sustainability strategy and messaging by understanding the values of the forest. Our client was also looking for a list of plants that they could introduce to the pond to make it a sustainable man-made wetland. This project used methodologies such as field survey, literature research, secondary research, scenario analysis and modeling, covering the study area of forest cooling effect and monetary values, forest noise attenuation, carbon sequestration, animal inventory and plant inventory. After the one-year study period, we found that forest reduces 15-20% of the baseline temperature and smoothens the temperature fluctuation. This effect equals approximately 57% of the cooling of BASF’s current cost on cooling. The carbon storage of the forest is about 964.71 tons and the gross annual equals to about 31.59 ton/year. Additionally, trees have the effect of reducing five to fifteen decibel of noise with a 40 meters tree belt and have the effect of smoothening the strength of noise fluctuation, which contributing to create a more stable environment. In the bio-diversity study, we have found 45 different species of trees and shrubs which were mostly common and widespread in South and Southeastern United States. We also observed 20 different species of birds and two mammals (White-tailed Deer and Virginia Opossum). Recommendations are provided at the end part of the report for the company’s environmental conservation team including plants recommendation for the storm water collection system, and forest conservation strategy, such as establishing educational tour, building an online platform to share newly observed animals and plants, and remarking the trail by installing tags.
Type
Master's project
Department
Nicholas School of the Environment and Earth Sciences
Subject
BASF forest, Cooling effect, Noise reduction, Carbon storage and sequestration, Bio-inventory
Permalink
https://hdl.handle.net/10161/9596
Citation
Zhu, Wenjia; & Ye, Wenting (2015). BASF Agricultural Solutions: Sustainability of Grounds and Landscaping at Durham, NC Facility. Master's project, Duke University. Retrieved from https://hdl.handle.net/10161/9596.
Collections
More Info
Show full item record