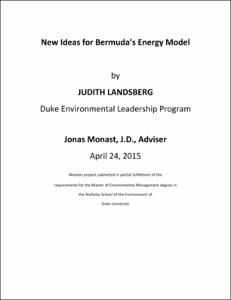 View / Download
1.4 Mb
Date
Author
Landsberg, Judith
Advisor
Monast, Jonas
Repository Usage Stats
216
views
1,513
downloads
Abstract
The world energy industry is in the throes of significant technological and policy change, providing Bermuda with an unprecedented opportunity to move toward a sustainable energy model. Presently, electricity on the island is supplied almost entirely by a diesel fuel oil utility, Belco, which is expecting to retire almost 50% of their generators in the next six years. At the same time, Bermuda’s Department of Energy is developing a new Energy Policy and establishing an independent Regulatory Authority. This study asks what Bermuda can learn from other island states which have committed to a sustainable energy portfolio. Bermuda has the opportunity to invest in alternative energy infrastructure at a lower price than was possible a few years ago, allowing for the displacement of a meaningful portion of Belco’s diesel oil capacity with renewable energy. The first section of the report describes the current energy model in Bermuda and two published plans for the future. The second section of the report develops case studies for the islands of Kaua’i and Aruba, which expect to supply more than 50% and 100%, respectively, of their electricity using renewable energy sources by 2020. Kaua’i and Aruba demonstrate similar policy and regulatory approaches, which contrast with Bermuda in the following ways: • Policy commitment to renewable energy • Aggressive pursuit of energy efficiency, both in generation and end-use • Aligning utility incentives with energy efficiency • Including environmental and social externalities in energy decisions • Embrace of innovation • Stable indirect incentives, such a power-purchase agreements for renewable energy The third section of the report reviews statutory approaches to energy efficiency in Vermont and California, two states particularly successful at reducing electricity demand, and recommends policy and regulatory changes for Bermuda, based on the two island, and Vermont/California case studies. The report concludes by estimating the potential impact of these approaches on Bermuda’s energy production. The results suggest that it may be possible to defer, possibly indefinitely, investment in new oil–based generating infrastructure and reduce fossil fuel electricity generation from the current 97% to below 50%.
Type
Master's project
Department
Nicholas School of the Environment and Earth Sciences
Subject
Energy policy, Bermuda, Island, Energy
Permalink
https://hdl.handle.net/10161/9608
Citation
Landsberg, Judith (2015). New Ideas for Bermuda’s Energy Model. Master's project, Duke University. Retrieved from https://hdl.handle.net/10161/9608.
Collections
More Info
Show full item record