ANALYSIS OF POLICY EFFECTIVENESS ON FOREST FIRES IN RIAU, INDONESIA 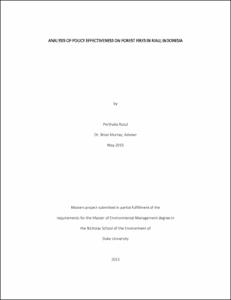 View / Download
1.7 Mb
Date
Author
Rosul, Perthalia
Advisor
Murray, Brian
Repository Usage Stats
263
views
1,766
downloads
Abstract
Annual land and forest fires in Indonesia have been a major environmental issue in the country for years. To solve the problem, the Indonesian government enacted a plan of action in 2007 to deal with land and forest fires. Numerous studies have focused on forest fires in Indonesia and their causes, but less attention has been devoted to whether the government’s policy is making any difference with respect to recent fire events. This analysis attempts to understand the effectiveness of the policy by focusing on Riau province, a major site of fires in the country. In the analysis I estimate the impacts of the policy by comparing the damage and losses caused by the 2014 fire and a counterfactual scenario of how they would have been different had the policy not been enacted. I interviewed experts who work in Indonesia’s land and forest fires to obtain a prediction of this counterfactual scenario. Based on these interviews, they believed, on average, that the 2014 forest fire would have burnt more areas had the policy not been enacted. There was also an indication that the benefits most likely outweighed the cost of implementing the plan of action. Therefore, I believe that some elements of the policy implemented in 2014 had some influence in limiting the level of damage and losses from the fire early that year and the policies overall provided a net benefit to society.
Type
Master's project
Department
Nicholas School of the Environment and Earth Sciences
Subject
Forest fires, forest policy, peatland, Riau
Permalink
https://hdl.handle.net/10161/9619
Citation
Rosul, Perthalia (2015). ANALYSIS OF POLICY EFFECTIVENESS ON FOREST FIRES IN RIAU, INDONESIA. Master's project, Duke University. Retrieved from https://hdl.handle.net/10161/9619.
Collections
More Info
Show full item record