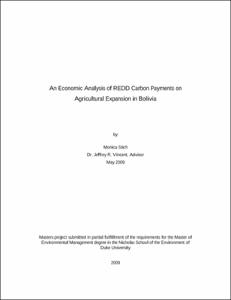 View / Download
2.4 Mb
Date
Author
Stich, Monica
Advisor
Vincent, Dr. Jeffrey R.
Repository Usage Stats
520
views
579
downloads
Abstract
As deforestation accounts for a significant percentage of worldwide carbon emissions, reducing emissions from deforestation and degradation (REDD) has been the focus of intense international debate. REDD programs offer a financial mechanism to compensate areas that would have been deforested for avoided carbon emissions above an established baseline. This study examined the feasibility of such a program in El Chore Forest Reserve in Bolivia, which faces destruction from the illegal seizure of land by poor immigrant farmers. Three main components were used to obtain a spatial distribution of the minimum price of carbon required for conservation (i.e. compensate for the opportunity cost of agriculture): estimation of biomass, prediction of deforestation, and calculation of the opportunity cost. A map of biomass was estimated by regressing spectral enhancements of 2007 satellite imagery on a spatially coarse reference map of the Amazon region. It was concluded that the reserve has an average biomass of 121.1 Mg biomass/ha with a standard deviation of 15.58. The spatial probability of future deforestation was calculated using a logistic analysis on deforestation between 2001 and 2004 based on biophysical variables. By applying a projection of area deforested per year based on historical trends, the results indicated the area that would be deforested. In the absence of intervention, it was predicted that 44% of the forest reserve would be converted to agriculture by 2036 (Kappa: 0.57). The opportunity cost was modeled using profit predictions of the four main crops (rice, soybean, maize, wheat). Depending on the crop, projections indicated that prices would increase 35-100% and yields were expected to increase 55-88% by 2040. Expected profits were scaled based on the suitability of the land by crop. The average opportunity cost for a three-year time period ranged from $904/ha in 2006 to $2143/ha in 2036. Using an economic model with an 8% discount rate the average price would need to be $21.17/tC. Since the biomass estimate is conservative, this is likely an upper bound on the price of carbon. These results could be used to inform the development of a carbon program and determine target areas for conservation initiatives.
Type
Master's project
Department
Nicholas School of the Environment and Earth Sciences
Subject
carbon payments
REDD
deforestation
opportunity cost of agriculture
economic modeling
Bolivia
Permalink
https://hdl.handle.net/10161/962
Citation
Stich, Monica (2009). An Economic Analysis of REDD Carbon Payments on Agricultural Expansion in Bolivia. Master's project, Duke University. Retrieved from https://hdl.handle.net/10161/962.
Collections
More Info
Show full item record