A COMPARISON OF MARKET CLEARING TOOLS IN ELECTRICITY SYSTEMS 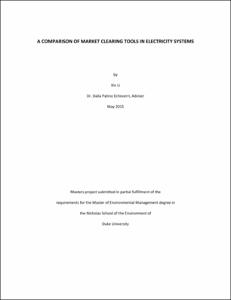 View / Download
957.3 Kb
Date
Author
Li, Xin
Advisor
Patino Echeverri, Dalia
Repository Usage Stats
225
views
388
downloads
Abstract
To maintain a strict balance between demand and supply in the US power systems, the Independent System Operators (ISOs) schedule power plants and determine electricity prices using a market clearing model. This model determines for each time period and power plant, the times of startup, shutdown, the amount of power production, and the provisioning of spinning and non-spinning power generation reserves, etc. Such a deterministic optimization model takes as input the characteristics of all the generating units such as their power generation installed capacity, ramp rates, minimum up and down time requirements, and marginal costs for production, as well as the forecast of intermittent energy such as wind and solar, along with the minimum reserve requirement of the whole system. This reserve requirement is determined based on the likelihood of outages on the supply side and on the levels of error forecasts in demand and intermittent generation. With increased installed capacity of intermittent renewable energy, determining the appropriate level of reserve requirements has become harder. Stochastic market clearing models have been proposed as an alternative to deterministic market clearing models. Rather than using a fixed reserve targets as an input, stochastic market clearing models take different scenarios of wind power into consideration and determine reserves schedule as output. Using a scaled version of the power generation system of PJM, a regional transmission organization (RTO) that coordinates the movement of wholesale electricity in all or parts of 13 states and the District of Columbia, and wind scenarios generated from BPA (Bonneville Power Administration) data, this paper explores a comparison of the performance between a stochastic and deterministic model in market clearing. The two models are compared in their ability to contribute to the affordability, reliability and sustainability of the electricity system, measured in terms of total operational costs, load shedding and air emissions. The process of building the models and running for tests indicate that a fair comparison is difficult to obtain due to the multi-dimensional performance metrics considered here, and the difficulty in setting up the parameters of the models in a way that does not advantage or disadvantage one modeling framework. Along these lines, this study explores the effect that model assumptions such as reserve requirements, value of lost load (VOLL) and wind spillage costs have on the comparison of the performance of stochastic vs deterministic market clearing models.
Type
Master's project
Department
Nicholas School of the Environment and Earth Sciences
Subject
Electricity systems
Market clearing
Stochastic model
Permalink
https://hdl.handle.net/10161/9621
Citation
Li, Xin (2015). A COMPARISON OF MARKET CLEARING TOOLS IN ELECTRICITY SYSTEMS. Master's project, Duke University. Retrieved from https://hdl.handle.net/10161/9621.
Collections
More Info
Show full item record