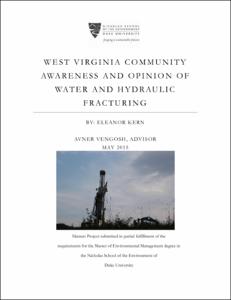 View / Download
2.4 Mb
Date
Author
Kern, Eleanor
Advisor
Vengosh, Avner
Repository Usage Stats
364
views
330
downloads
Abstract
The need for cleaner energy sources has driven a boom in oil and gas extraction via hydraulic fracturing. However, significant environmental issues that have been raised in response to this rapid expansion of fracking. Most of the scientific research has focused on potential water contamination (methane or toxic chemicals) or seismic activity related to drilling or wastewater injection, but there has been little research on the impacts of fracking on local communities that are directly affected by oil and gas activity. Communities are often without an avenue to voice their opinion or to discuss how they are affected by the rapid rise in fracking with scientists, politicians or industry. Opinion surveys collected from residents in West Virginia who live near hydraulic fracturing operations were analyzed and compared to groundwater drinking well water tests to determine how residents who live in areas impacted by oil and gas drilling feel about hydraulic fracturing and if certain informational inputs (online reports vs. well water data) impact residents’ opinions. Survey data was collected in Doddridge and Tyler counties of West Virginia from 27 residents whose water was either being tested for the first time or being retested by researchers at Duke University. The participants were asked about their knowledge and opinions of hydraulic fracturing and water quality issues in their community. Their answers were analyzed by qualitative and spatial analyses using STATA and ArcGIS. The survey data results were compared to selected chemical results from the participants’ drinking well water samples. The results from the project showed that, overall, the residents surveyed disliked fracking, those residents who received information from online reports were more likely to have negative opinions of fracking, residents who had received water testing services for their groundwater before taking the survey were more likely to consider their water quality in their opinion, and residents who had more information about their water supplies were more invested in water issues that could arise in the future due to fracking activities. Although the survey had limited respondents, it gives valuable insight into how scientific data may impact the opinions of water quality issues and hydraulic fracturing for residents in northwestern West Virginia.
Type
Master's project
Department
Nicholas School of the Environment and Earth Sciences
Subject
fracking
West Virginia
survey
water quality
opinion
GIS
Permalink
https://hdl.handle.net/10161/9632
Citation
Kern, Eleanor (2015). West Virginia Community Awareness and Opinion of Water and Hydraulic Fracturing. Master's project, Duke University. Retrieved from https://hdl.handle.net/10161/9632.
Collections
More Info
Show full item record