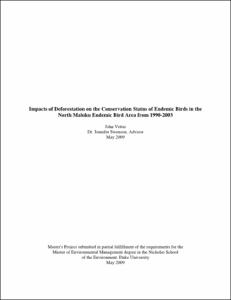 View / Download
3.7 Mb
Date
Author
Vetter, John P.
Advisor
Swenson, Jennifer
Repository Usage Stats
953
views
1,808
downloads
Abstract
Satellite imagery has become a powerful tool to analyze land-use trends across large portions of the globe, including remote areas where access is logistically or political impossible. Due to the rapid pace of deforestation, the high biodiversity contained within, and the difficulty of access and standardized field surveys, the tropics are a key front for using remote sensing to identify target areas for conservation action and, more recently, to inform species-level trends. This study focuses on deforestation in eastern Indonesia, which has some of the highest rates of forest clearing in the world from mining, plantation expansion, timber extraction, and shifting agriculture. Forest loss on the highly biodiverse islands of the North Maluku district in eastern Indonesia was examined from 1990 to 2003 and the conservation status of 39 restricted-range avian species found in the area was re-assessed from these trends. Of the land area available for analysis, forests declined from 86% to just under 70% in these thirteen years, with much of this occurring in the lowlands (below 400m). Consequently, those species with large amounts of their range at low elevations were disproportionately affected, with 10 out of 25 endemic species being under more threat than currently listed by the IUCN Red List and only 3 being considered safer than currently listed.
Type
Master's project
Department
Nicholas School of the Environment and Earth Sciences
Subject
Indonesia
Maluku
Deforestation
Avian Species
IUCN Red List
Permalink
https://hdl.handle.net/10161/964
Citation
Vetter, John P. (2009). Impacts of Deforestation on the Conservation Status of Endemic Birds in the North Maluku Endemic Bird Area from 1990-2003. Master's project, Duke University. Retrieved from https://hdl.handle.net/10161/964.
Collections
More Info
Show full item record