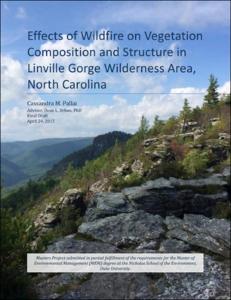 View / Download
5.3 Mb
Date
Author
Pallai, Cassandra
Advisor
Urban, Dean L.
Repository Usage Stats
397
views
367
downloads
Abstract
Located in Western North Carolina, Linville Gorge Wilderness Area has an extensive fire history that has been characterized by burns of variable size and severity. Beginning in the 1940s, an era of burn suppression policies curtailed the Gorge’s established fire regime. Local stakeholders, including The Wilderness Society (TWS) and the U.S. Forest Service, are concerned about the effects of burn suppression on fire dependent species and communities. As such, these groups are interested in following a modern resurgence of anthropogenic wildfires with a prescribed fire program. Many sampling efforts since 1992 have studied permanent vegetation plots spread throughout Linville Gorge to characterize local plant communities and their relationship with five recent fires. With my Master’s Project, done for The Wilderness Society, two objectives related to fire in the Gorge are addressed. First, structural and compositional trends in Linville Gorge forests have been identified, and those trends have been overlain with geospatial environmental variables as well as remotely sensed fire severity estimations. Second, wildfires have been evaluated for their meeting of restoration goals. TWS’s restoration targets include a reduction in the importance of ericaceous and fire intolerant species, an increase in the importance of fire dependent species, and a lack of invasion from nonnative species following fire events. Multivariate statistical methods have been implemented to analyze the Linville vegetation dataset for structural and compositional trends, and paired t-tests have been utilized to evaluate changes in target species’ importance with fire. Fire has emerged as a major driver of change and compositional heterogeneity in the Wilderness Area. However, burns have produced variable success in meeting restoration goals. While ericaceous species have been reduced in importance, fire dependent species also have experienced declines. Fire intolerant species have increased in abundance with fire; similar increases have not been observed on unburned plots. Invasive species may be a concern, particularly in twice burned forests. If prescribed fire is pursued as a restoration tool in Linville Gorge Wilderness Area, managers should be careful in planning the frequency and severity of fires, and continue to monitor results for the achievement of goals.
Type
Master's project
Department
Nicholas School of the Environment and Earth Sciences
Subject
Linville Gorge Wilderness Area
GIS
dNBR
The Wilderness Society
fire monitoring
prescribed fire
Permalink
https://hdl.handle.net/10161/9645
Citation
Pallai, Cassandra (2015). Effects of Wildfire on Vegetation Composition and Structure in Linville Gorge Wilderness Area, North Carolina. Master's project, Duke University. Retrieved from https://hdl.handle.net/10161/9645.
Collections
More Info
Show full item record