Follow the Leader? Evaluating California as an electricity model for the future 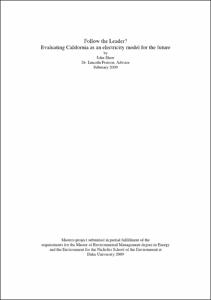 View / Download
990.5 Kb
Date
Author
Shaw, John
Advisor
Pratson, Lincoln
Repository Usage Stats
760
views
799
downloads
Abstract
As the search for low carbon sources of electricity in the US continues it makes sense to consider those systems which are already providing electricity without significant CO2 emissions. In the US there are a few states with emissions which are significantly lower than the national average, California is one such example and it has been pointed to many times as a model for the rest of the country to follow. In determining whether or not these types of changes would be possible at a national level, the differences between the US and California must be understood as well as quantifying what the changes might be. Major differences between the two include climate, generation mix and levels of consumption among others. The changes necessary entail greatly reducing electricity consumption and in addition generating much more electricity from natural gas and renewable sources while almost totally phasing out coal. While there would be significant reductions in CO2 emissions and other gases associated with coal combustion by transforming the US electricity system to one like California’s, the costs and impacts of such changes make the transition unlikely. Greatly increased dependence on natural gas would lead to higher prices and the use of coal would need to be tightly controlled. On the bright side, the disparity in price between the US and California indicates that as prices rise in the rest of the country, there may be a substantial demand response. In addition there is potential for further demand reductions by implementing the most effective efficiency programs such as decoupling and the re-investment of utility profits. There are many important lessons that can be learned from the experience in California but the path that the US takes to lower CO2 emissions will likely be implemented differently than how it was in California.
Type
Master's project
Department
Nicholas School of the Environment and Earth Sciences
Subject
California
Electricity
Permalink
https://hdl.handle.net/10161/966
Citation
Shaw, John (2009). Follow the Leader? Evaluating California as an electricity model for the future. Master's project, Duke University. Retrieved from https://hdl.handle.net/10161/966.
Collections
More Info
Show full item record