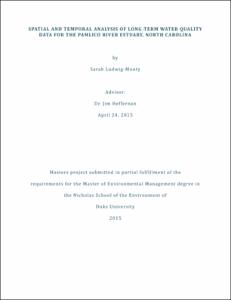 View / Download
2.3 Mb
Date
Author
Ludwig-Monty, Sarah
Advisor
Heffernan, Dr Jim
Repository Usage Stats
228
views
231
downloads
Abstract
EXECUTIVE SUMMARY North Carolina has experienced significant growth in population, development, and industrial farming that are responsible for delivering unprecedented amounts of pollutants into its freshwater and coastal waterways. The Pamlico River Estuary has experienced reports of consistent fish kills since the 1970’s which are identified to be a result of eutrophic conditions caused by excessive nutrient loading. East coast commercial and recreational fishing is largely dependent upon this system’s ability to provide habitat for the breeding, refuge, and feeding for a large variety of aquatic species. In 1989 the estuary was designated as a nutrient sensitive waterway which prompted the N.C. Division of Water Quality to develop a Total Maximum Daily Load (TMDL) for nitrogen and phosphorous. The TMDL was approved in 1995 and called for a 30% reduction of instream total nitrogen loading and no increase in total phosphorous loading in order to prevent 90% of the chlorophyll a standard exceedances within the estuary. Nearly twenty years into the state's nutrient reduction program, the goals of the TMDL have yet to be met. This project uses a previously un-evaluated data set of water quality parameters over a 25-year period in the Pamlico River Estuary to understand the patterns and causes of continued impairment in that ecosystem. Analysis of chlorophyll a and nitrogen concentrations produced the following main results: Key Findings of Chlorophyll a Analysis: • Majority of chlorophyll a impairment occurs within the middle to upper regions of the estuary. • Chlorophyll a standard exceedance was determined to occur in equal magnitude year round. • Chlorophyll a concentrations are inversely correlated with incoming river discharge in the upper regions of the estuary. Key Findings of Nitrogen Analysis: • Trend analysis identified significant decreasing trends in ammonium and nitrate and significant increasing trends in dissolved organic nitrogen. • Total nitrogen composition dominance shifted from nitrate to dissolved organic nitrogen in the early 2000s. • Nitrogen concentrations are significantly influenced by both season and incoming river discharge. Chlorophyll a impairment is still prevalent throughout the estuary despite the adoption of nutrient reduction strategies in the 1990s. The observed shifts in total nitrogen composition could have ecological impacts on phytoplankton population composition, as well as effects of higher trophic levels and nutrient cycling within the estuary. The nitrogen reduction goals of the Tar-Pamlico TMDL have likely not been achieved due to the increases observed in dissolved organic nitrogen concentrations potentially coupled with inadequate decreases in nitrate and ammonium in order to produce decreasing trends in total nitrogen. Greater implementation and stricter enforcement of non-point source nutrient reduction programs are needed, with specific regard to poultry and hog industrial livestock operations. Research into the forms of dissolved organic nitrogen that are present within the estuary are needed to understand the nitrogen cycling and ecological dynamics that occur as well as to provide insight into potential sources responsible for increasing concentrations within the estuary. North Carolina regulators need to address the inability for current nutrient reduction programs to adequately reduce nutrient loading in order to improve conditions within the Pamlico River Estuary and protect the natural resources this ecosystem provides.
Type
Master's project
Department
Nicholas School of the Environment and Earth Sciences
Subject
North Carolina
Eutrophication
Coastal Estuaries
Water Quality
Nutrient Pollution
Permalink
https://hdl.handle.net/10161/9669
Citation
Ludwig-Monty, Sarah (2015). Spatial and Temporal Analysis of Long-Term Water Quality Data for the Pamlico River Estuary, North Carolina. Master's project, Duke University. Retrieved from https://hdl.handle.net/10161/9669.
Collections
More Info
Show full item record