A spatio-temporal gap analysis of cetacean survey effort in the U.S. Mid- and South Atlantic 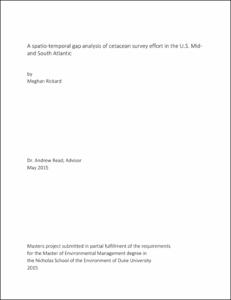 View / Download
1.4 Mb
Date
Author
Rickard, Meghan
Advisor
Read, Andrew
Repository Usage Stats
190
views
238
downloads
Abstract
In January 2015, the Bureau of Ocean Energy Management (BOEM) released the 2017-2022 Draft Proposed Program for oil and gas leasing on the outer continental shelf, which includes a large area of the Atlantic. The release of this proposal was preceded by a final Environmental Impact Statement in February 2014 and a July 2014 Record of Decision to consider permit applications for seismic surveys in the Mid- and South Atlantic planning areas. The renewed interest in oil and gas exploration in the Atlantic and steady pace of recent decision making is significant because the Atlantic has been off limits to oil and gas since 1982 and there is substantial concern within the scientific community about their environmental impacts. In particular, cetaceans depend on sound for all aspects of their lives, from communication to navigation, and some species are known to be vulnerable to the effects of seismic surveys. Thirty-four species of cetaceans are found within the planning areas alone, six of which are endangered. To protect cetaceans from negative impacts of seismic exploration and to make the best management decisions possible, we need to know where they are and when they’re there. The objectives of my project, therefore, were to identify gaps in space and time of cetacean survey effort and to inform BOEM of the needs for additional survey effort. I conducted a geospatial analysis on a cetacean survey effort tracklines data set, which includes 40 surveys from aerial and shipboard platforms from 1992 to 2014. Results revealed that effort has not been consistent through the years. Overall, as distance from shore increases, less survey effort occurs, and the fall season has both the fewest surveys and least total linear effort. Based on the results, I make two primary recommendations: (1) Future surveys should be conducted during the fall in all areas; and (2) Pelagic areas, especially outside of the Exclusive Economic Zone (EEZ), should be a priority for future survey effort. Understanding spatial and temporal trends in cetacean use of the Mid- and South Atlantic planning areas is critical to making informed management decisions regarding seismic exploration.
Type
Master's project
Department
Nicholas School of the Environment and Earth Sciences
Subject
cetaceans, seismic, survey effort, Atlantic
Permalink
https://hdl.handle.net/10161/9679
Citation
Rickard, Meghan (2015). A spatio-temporal gap analysis of cetacean survey effort in the U.S. Mid- and South Atlantic. Master's project, Duke University. Retrieved from https://hdl.handle.net/10161/9679.
Collections
More Info
Show full item record