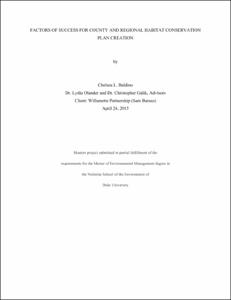 Habitat Conservation Plans (HCPs) are a means for private landowners to comply with the Endangered Species Act. Historically, the HCP process has been done on a case-by-case basis, but it has become increasingly common for county and regional governments to create region-wide HCPs that cover development from multiple projects in the entire region. Local governments recognize that these plans can increase economic certainty for residents, increase development, and potentially increase conservation. However, region-wide plans are time and money intensive, so sometimes they fail to be completed.

HCP legal, academic and policy experts, who acted as a focus group for this research, stated that few have studied the "human" side of HCP creation, i.e., HCP process design and management. Such information may be useful to diverse interests, such as conservationists and developers, in counties and regions where a large-scale HCP is possible. Thus, the overarching research question for this project was: What factors and processes lead to the successful completion of a Habitat Conservation Plan at the regional and county level?

This report includes five case studies on county or regional HCPs, located in 1) Benton County, OR; 2) Coachella Valley, CA; 3) East Contra Costa County, CA; 4) Pima County, AZ; and 5) Williamson County, TX. Three to four interviews per case with individuals who were knowledgeable about the county or regional government's perspective of the HCP process were the primary sources of information. Each interviewee was asked questions regarding:

Each case study synthesizes the information from the interviewees, and at the end of this report, a cross-case study analysis brings all of the findings together. This analysis showed that some state agencies, such as the California Department of Fish and Wildlife, played a large role in the HCP creation process, while others were less involved. Also, because the length of time for HCP creation varied from approximately 5 to 15 years, the number of staff from the county or region that were necessary to complete these plans varied also. However, for the plans that took only around 5 years, approximately 2 full time staff from the county were needed. Staff opinions regarding the plans, e.g., whether they felt the plans would generate funding for conservation, also varied; most likely staff's sentiments reflected the local community's values. Despite differences between the cases, this analysis illuminated several factors that contributed to successful HCP creation: <ul><li>A cooperative relationship between the county or region and the USFWS appears important. The relationship between the local governing body and the US Fish and Wildlife Service (USFWS) office was positive in four out of the five of these successfully completed cases.</li> <li> Local and political support, especially early stakeholder engagement, was important in all cases.</li> <li> A scientific advisory committee or a consultant was necessary to determine what species to cover in the plan.</li> <li> Across all cases, USFWS Section 6 grants were the primary source of funds.</li> <li> The most effective way to handle mitigation at this scale was through utilization of the county or region's own reserve lands, but the funding mechanism for this type of mitigation varied.</li></ul>

An additional exploratory analysis provided insight into three important factors leading to HCP failure. The first is delays at the regional FWS level due to miscommunication and tensions with the regional or county staff. The second occurs when HCP preparers make the scope of the HCP too broad. And the third results from poor project management and HCP preparers who are not responsive to USFWS input.