U.S. Federal Water Pollution Control: How History Has Contributed to the Mismatch Between the Legal Framework and the Current State of the Science 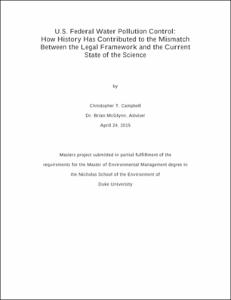 View / Download
1.3 Mb
Date
Author
Campbell, Christopher
Advisor
McGlynn, Brian
Repository Usage Stats
235
views
329
downloads
Abstract
The current framework under which federal authorities regulate waters of the United States is in many ways constrained by our history. Regulatory policy and scientific understanding have developed on parallel but independent trajectories, with little crossover. In 2006, the Supreme Court addressed the scope of federal regulatory authority under the Clean Water Act in the case Rapanos v. United States, and reached a split-decision that left no clear mandate for the lower courts to follow. I examined the influence of Rapanos on the current regulatory landscape, and found highly variable application of the Supreme Court’s split-decision in the lower courts. Some courts have begun to consider hydrologic connectivity and ecological function, but the mismatch between policy and scientific understanding largely remains. There are simple tools and techniques that can be used to identify which areas of a landscape are likely to be most influential to waters of the United States. To demonstrate, I used terrain analysis techniques to examine a watershed in Montana and identify influential areas based on spatial and temporal hydrologic connectivity.
Type
Master's project
Department
Nicholas School of the Environment and Earth Sciences
Subject
Clean Water Act
Rapanos
Hydrologic Connectivity
Permalink
https://hdl.handle.net/10161/9695
Citation
Campbell, Christopher (2015). U.S. Federal Water Pollution Control: How History Has Contributed to the Mismatch Between the Legal Framework and the Current State of the Science. Master's project, Duke University. Retrieved from https://hdl.handle.net/10161/9695.
Collections
More Info
Show full item record