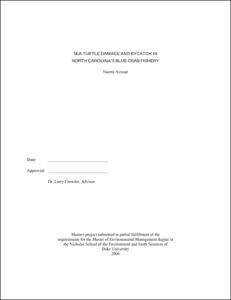 View / Download
2.4 Mb
Date
Author
Avissar, Naomi
Advisor
Crowder, Larry B
Repository Usage Stats
640
views
726
downloads
Abstract
In North Carolina’s sounds, loggerhead sea turtles are causing significant economic problems for blue crab fishermen by damaging crab pots, stealing bait, and reducing crab catch. This may be causing the fishermen to change their fishing locations, moving their crab pots further towards shore where they potentially encounter more bycatch of species that tend to be found near shore, such as diamondback terrapins. Loggerheads are a federally threatened species, and most of the loggerheads that interact with crab pots in North Carolina’s sounds are large juveniles, one of the most sensitive stages of their life cycle (Crouse et al. 1987). To exacerbate the problem, the state’s blue crab fishery is threatened by pollution, nitrification, and overfishing, and is listed in the “concern” category by the NC Division of Marine Fisheries. The loggerhead-fishery conflict could worsen as blue crabs are depleted, because turtles and fishermen that are drawn to the same prey may aggregate in smaller patches of crab availability, increasing probability of overlap. Due to these issues, and those associated with bycatch, careful management of the blue crab resource and the turtle interaction in the fishery is crucial. I conducted a collaborative fishing study with commercial crabbers to characterize location, timing, and extent of sea turtle damage to their crab pots, and tracked crab catch and bycatch in each pot. I examined spatial and temporal overlaps of crabbing with sea turtles and bycatch, and documented turtle-damage hotspots. Though over 990 animals were captured as bycatch, no clear spatial pattern was detected. My results may guide crabbers to times and areas of minimal overlap, where they should concentrate their fishing effort to minimize economic and ecological damages. This document describes the results of this research, and provides ecological, economic, and political analysis of the conflict.
Type
Master's project
Department
Nicholas School of the Environment and Earth Sciences
Subject
Loggerhead sea turtle (Caretta caretta)
Blue crab (Callinectes sapidus)
Diamondback terrapins (Malaclemys terrapin)
Fisheries
Permalink
https://hdl.handle.net/10161/97
Citation
Avissar, Naomi (2006). Sea Turtle Damage and Bycatch in North Carolina's Blue Crab Fishery. Master's project, Duke University. Retrieved from https://hdl.handle.net/10161/97.
Collections
More Info
Show full item record