The Effects of Hunting on a Forest Animal Community in Gabon 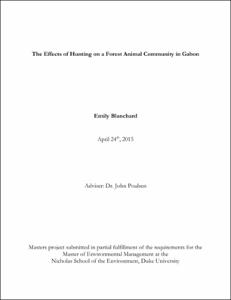 View / Download
996.9 Kb
Date
Author
Blanchard, Emily
Advisor
Poulsen, John
Repository Usage Stats
598
views
428
downloads
Abstract
Gabon holds some of the world’s richest, most species-diverse tropical rainforest. Over 80% of the country’s landcover is forest and up to 20% of its plant and animal species are endemic. However, as the country seeks to increase its economic development through practices such as logging, the resulting creation of new roads and settlements in formerly remote areas increases the risk of bushmeat hunting and poaching. Species such as the African forest elephant have already experienced dramatic declines from hunting, which poses potential ecological consequences such as reduced seed dispersion. This study examined the effects of hunting on an animal community in a northeastern area of Gabon by measuring three types of hunting pressure: roads, waterways, and human populations. I focused on 9 animal species (Crowned Guenon, Grey-cheeked Mangabey, Mustached Monkey, White-nosed Guenon, Blue Duiker, Yellow-backed Duiker, African Forest Elephant, Chimpanzee and Gorilla) because of their specific targeting by bushmeat hunters or poachers and because they had adequate data to estimate population abundance. The study area, a 5,800 sq. km region in the Ogouué Ivindo province of northeastern Gabon, reflected a gradient of human activities and hunting pressure. The study consisted of direct (animals seen or heard) and indirect (dung piles or nests) observations along 24 transects, which were walked at least once per month from January to December 2014. I used these observations to calculate species abundances and compared these to past estimates. In addition, I analyzed abundance correlations with the three forms of hunting pressure. Overall, 8 of the 9 species analyzed in this study have declined in abundance since their previous estimates. Blue Duikers have suffered the most drastic decline, followed by Chimpanzees and White-nosed Guenons. Distances to the nearest small village and nearest main road were the overall strongest and most commonly significant indicators of hunting pressure. Results suggest that most of the study area’s species decline has been caused by excessive bushmeat hunting. On the whole, the entire wildlife community is declining in abundance and these trends are likely to continue unless measures are taken to reduce rates of hunting and poaching.
Type
Master's project
Department
Nicholas School of the Environment and Earth Sciences
Subject
Gabon
hunting
logging
wildlife
bushmeat
poaching
Permalink
https://hdl.handle.net/10161/9700
Citation
Blanchard, Emily (2015). The Effects of Hunting on a Forest Animal Community in Gabon. Master's project, Duke University. Retrieved from https://hdl.handle.net/10161/9700.
Collections
More Info
Show full item record