Marine Managed Areas in the Human Cultural Context: An assessment of the 'socio-cultural reality' associated with MMA establishment in Belize 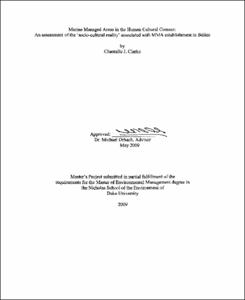 View / Download
2.5 Mb
Date
Author
Clarke, Chantalle J
Advisor
Orbach, Michael
Repository Usage Stats
331
views
565
downloads
Abstract
Across the globe, marine managed area (MMA) designation has been traditionally justified primarily from a biological perspective, the goals of which have focused on conserving species and habitats critical for maintaining the ecological integrity of marine ecosystems. As such, MMAs have evolved over time to become “bio-ecological” tools for marine conservation that lack social and/or cultural meaning. In the Belizean context, the situation is no different. MMAs have been fully embraced by Belize as tools for improving its strategy towards coastal and marine resources management. While MMA processes in Belize now incorporate socio-economic factors, the fundamental human cultural values and belief systems that drive behavior with respect to MMA resources use have not been formally considered. I conducted this Master’s project in conjunction with Conservation International’s MMA Cultural Roles Study in Belize, the main goal of which was to describe and assess cultural values and perceived cultural impacts associated with the establishment of Laughing Bird Caye and Gladden Spit as MMAs on Seine Bight and Hopkins, two coastal communities along Belize’s southern coast. I investigated this issue by conducting a total of 37 in-depth, semi-structured interviews with key informants from the two communities, in addition to undertaking observational ethnographies. In order to gain a holistic perspective for my research, I interviewed informants on the following topics: 1) history of involvement with MMAs; 2) community characteristics; 3) perceptions of “the environment”; 4) cultural impacts resulting from MMA establishment and other factors; and 5) gender roles and marine activities. My findings suggest that due to an almost non-existent involvement of Seine Bight with the two MMAs, this village suffered no identifiable cultural impacts from the establishment of either MMA. Hopkins Village has also had a relatively low involvement with Laughing Bird Caye and as such, did not suffer any cultural impacts from its establishment. The establishment of Gladden Spit as an MMA seems to have had little impact on the habitual fishing activities of Hopkins residents since they continue to use this MMA. In spite of these findings, cultural data can have important implications for understanding how coastal communities adapt their cultural attitudes and behaviors in response to the imposition of conservation codes, such as MMAs, that affect their usage of the marine commons. This basic understanding can be an invaluable first step towards predicting the long-term biological, socio-economic and cultural “successes” of MMA establishment in Belize, the wider Caribbean region and other countries around the globe.
Type
Master's project
Department
Nicholas School of the Environment and Earth Sciences
Subject
Belize
Marine Managed Area
Cultural Impact
Seine Bight
Hopkins
Permalink
https://hdl.handle.net/10161/971
Citation
Clarke, Chantalle J (2009). Marine Managed Areas in the Human Cultural Context: An assessment of the 'socio-cultural reality' associated with MMA establishment in Belize. Master's project, Duke University. Retrieved from https://hdl.handle.net/10161/971.
Collections
More Info
Show full item record