The City Has Changed Them: Storytelling, Memory, and the Family Photo Album 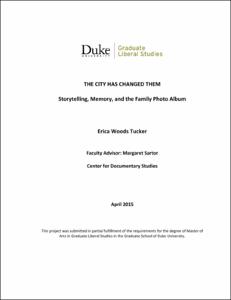 View / Download
2.7 Mb
Date
Author
Woods Tucker, Erica
Advisor
Sartor, Margaret
Repository Usage Stats
271
views
573
downloads
Abstract
The City has Changed Them: Storytelling, Memory, and the Family Photo Album is an interdisciplinary work that consists of five parts. Four of the parts have an analytical component as well as a personal story to accompany them. Along with the writings there are also seventeen images from one of my family’s photo albums. The purpose of the project is to locate a family through memoir and photos, and trace them through the American phenomenon known as the Great Migration. I used my maternal grandmother, Malqueen Goldsmith, and my father, James Woods, as anchors to the memoir pieces. I outline their departure from the south, their subsequent relocation to New York City, their search for work, interactions within their own communities and the larger social context in which they lived and raised a family from the mid-1940s to roughly 1975. The purpose of the project is for the researcher to view the African American family photo album as a serious historical object. I believe it to be an historical artifact as well as a visual record that warrants the same serious study as traditional historical objects.
Type
Master's thesis
Department
Graduate Liberal Studies
Subject
Photo Album
Photography
Great Migration
Memoir
Story Telling
Permalink
https://hdl.handle.net/10161/9711
Citation
Woods Tucker, Erica (2015). The City Has Changed Them: Storytelling, Memory, and the Family Photo Album. Master's thesis, Duke University. Retrieved from https://hdl.handle.net/10161/9711.
Collections
More Info
Show full item record