An Education of Feelings: Thomas Hardy, Tess of the d'Urbervilles, and the Art of Fiction 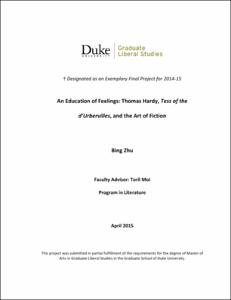 *Designated as an Exemplary Final Project for 2014-15*

In my thesis I set out to discover and interpret Thomas Hardy’s views on the art of fiction. I focus specifically on three literary essays written by Hardy during the late 1880s and the early 1890s and corroborate my conceptual analysis of these essays by researching their historical context, which further illuminates my understanding of the essays’ significance. The historical context includes the widespread censorship of fiction from vigilant Victorian publishers and circulating libraries, and the fashionable discussion of French realist novels. Finally I use Tess of the d’Urbervilles to demonstrate how the novel embodies Hardy’s artistic vision. I hope such discussion of the novel will enhance the reader’s appreciation of it according to Hardy’s understanding of the benefits of fiction reading. I show that the fastidious Victorian preoccupation with morality and propriety blinded the critics to Hardy’s ability of rendering with force and sincerity human emotional delights and sufferings. Unlike the French realist authors, who were devoted to the objective explanation of human behavior, Hardy believed that the unique persuasive power of fiction resides in its appeal to the reader’s intuitive conviction. However, there is a fundamental difference between sentimental novels and Hardy’s conception of great fiction. The latter’s claim of superiority lies in the author’s sincere and personal engagement with the concrete and tangible details of real life.
Type
Master's thesis
Department
Graduate Liberal Studies
Subject
Thomas Hardy; Tess; art of fiction
Permalink
https://hdl.handle.net/10161/9721
Citation
Zhu, Bing (2015). An Education of Feelings: Thomas Hardy, Tess of the d'Urbervilles, and the Art of Fiction. Master's thesis, Duke University. Retrieved from https://hdl.handle.net/10161/9721.
Collections
More Info
Show full item record