Zainichi: How Violence and Naming Determine A Consciousness 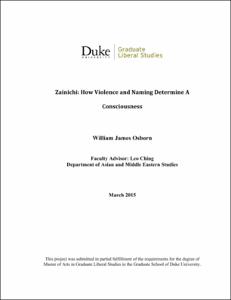 View / Download
377.1 Kb
Date
Author
Osborn, William
Advisor
Ching, Leo
Repository Usage Stats
435
views
5,188
downloads
Abstract
The purpose of this research paper is to identify how the post-colonial Koreans (also known as zainichi) who remained in Japan after World War II form their identity. The challenge within this question lies in the fact that these zainichi are not citizens of Japan or Korea. Rather they are in a perpetual state of limbo, having both Japanese and Koreans forcing their ideals and beliefs on them. This lack of nationality creates overwhelming challenges and pressure for the zainichi to figure out who they are without others telling them who they should be. In order to analyze this central question of zainichi identity formation I have chosen to analyze two popular films about zainichi identity made over 30 years apart. The films in question are Nagisa Oshima’s 1968 film Death by Hanging and Isao Yukisada’s 2001 film GO. Within these films I will analyze two separate themes that are crucial to the identity formation of the zainichi, Violence and Naming. After reviewing the data my conclusion is that the zainichi do not form their own identity. Rather it is the Japanese and their outdated nationalistic beliefs that form the identity of the zainichi. Until the Japanese are able rid themselves of their old Imperial Japanese identity, the zainichi will be unable to form their own.
Type
Master's thesis
Department
Graduate Liberal Studies
Subject
Zainichi
Korea
Japan
Race
Cultural
Permalink
https://hdl.handle.net/10161/9738
Citation
Osborn, William (2015). Zainichi: How Violence and Naming Determine A Consciousness. Master's thesis, Duke University. Retrieved from https://hdl.handle.net/10161/9738.
Collections
More Info
Show full item record