Why Can't We Win? The Double-Edged Sword of Black Success in Sports 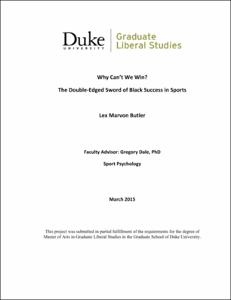 View / Download
1.5 Mb
Date
Author
Butler, Lex
Advisor
Dale, Gregory A.
Repository Usage Stats
367
views
701
downloads
Abstract
The premier sports in the United States, football and basketball, have become an avenue of social mobility for blacks. As more black athletes found success, the number of black participants increased drastically over time as evidenced by the disproportionate number of blacks in these sports as compared to in the general population. For the purpose of this study, the following questions are investigated: Why are blacks disproportionately represented, specifically, in football and basketball? What challenges has this phenomenon caused for blacks? As means of finding evidence, this research examines the history of the integration of blacks in sports and statistical data on the racial composition of sports on the intercollegiate and professional levels. Additionally, it explores the cultural influences that contribute to sport choice and athletic success in the black community. Lastly, the research addresses the numerous societal and personal challenges that black athletes, specifically, in the sports of football and basketball, face. Based on the research, blacks have a high participation rate and athletic achievement in football and basketball in comparison to other sports because of cultural influences such as socioeconomic status and black role models. Despite the success of black athletes in sports, they are still exploited and made to feel inferior, resembling the experiences of black people during the pre-Civil Rights era. Concurrently, blacks are relying heavily on a limited number of sports that have a significantly low chance of playing professionally while neglecting the ultimate opportunity to build a hopeful future through education.
Type
Master's thesis
Department
Graduate Liberal Studies
Subject
Race, Sports, Education, Blacks, Athletic Achievement, Disproportionate
Permalink
https://hdl.handle.net/10161/9742
Citation
Butler, Lex (2015). Why Can't We Win? The Double-Edged Sword of Black Success in Sports. Master's thesis, Duke University. Retrieved from https://hdl.handle.net/10161/9742.
Collections
More Info
Show full item record