An Analysis of the Potential Democratizing Effects of Social Media: A Chinese Experience 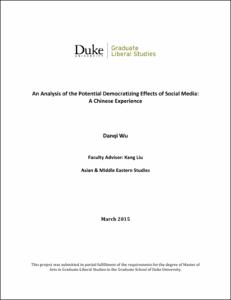 View / Download
798.0 Kb
Date
Author
Wu, Danqi
Advisor
Liu, Kang
Repository Usage Stats
354
views
1,879
downloads
Abstract
This paper analyzes the democratizing potential of Chinese social media. The Chinese government’s media restriction always lies at the key core of international criticism. The rise of Chinese social media, and citizen journalism in particular, has been regarded as the key battleground for China’s future. However, the democratizing potential of Chinese social media in general and citizen journalism in particular stand in need of investigation in China’s unique context. The same holds true for the cross-cultural applicability of a Western-style democratic path in the Chinese context. This paper analyzes China’s current socioeconomic reality and ideological shifts, and agrees that these changes qualify China as a more liberal society. However, this study also suggests that collective traditions in Chinese society are still strong at both grassroots and authoritative levels. Therefore, it is mistaken to assume that China has been ideologically prepared for undertaking a reform at a structural level. In a similar vein, although Chinese social media, and citizen journalism in particular, is on the rise, demonstrating the power of breaking down both the technological and ideological barriers for deepening China’s political transformation, its contribution to the dawn of democracy is not nearly as much as we have wished for. Over-anticipation, over-reliance and over-interference by the Chinese government may undermine its democratizing potential as a transformative tool and finally result in reversing the process of its growth and development.
Type
Master's thesis
Department
Graduate Liberal Studies
Subject
Chinese social media; citizen journalism; Internet censorship;
Permalink
https://hdl.handle.net/10161/9748
Citation
Wu, Danqi (2015). An Analysis of the Potential Democratizing Effects of Social Media: A Chinese Experience. Master's thesis, Duke University. Retrieved from https://hdl.handle.net/10161/9748.
Collections
More Info
Show full item record