Schema-driven construction of future autobiographical traumatic events: the future is much more troubling than the past. 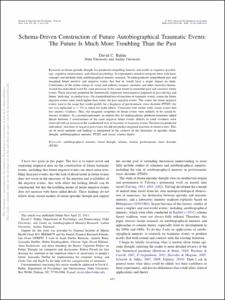 View / Download
239.4 Kb
Date
Author
Rubin, David C
Repository Usage Stats
213
views
285
downloads
Abstract
Research on future episodic thought has produced compelling theories and results in cognitive psychology, cognitive neuroscience, and clinical psychology. In experiments aimed to integrate these with basic concepts and methods from autobiographical memory research, 76 undergraduates remembered past and imagined future positive and negative events that had or would have a major impact on them. Correlations of the online ratings of visual and auditory imagery, emotion, and other measures demonstrated that individuals used the same processes to the same extent to remember past and construct future events. These measures predicted the theoretically important metacognitive judgment of past reliving and future "preliving" in similar ways. On standardized tests of reactions to traumatic events, scores for future negative events were much higher than scores for past negative events. The scores for future negative events were in the range that would qualify for a diagnosis of posttraumatic stress disorder (PTSD); the test was replicated (n = 52) to check for order effects. Consistent with earlier work, future events had less sensory vividness. Thus, the imagined symptoms of future events were unlikely to be caused by sensory vividness. In a second experiment, to confirm this, 63 undergraduates produced numerous added details between 2 constructions of the same negative future events; deficits in rated vividness were removed with no increase in the standardized tests of reactions to traumatic events. Neuroticism predicted individuals' reactions to negative past events but did not predict imagined reactions to future events. This set of novel methods and findings is interpreted in the contexts of the literatures of episodic future thought, autobiographical memory, PTSD, and classic schema theory.
Type
Journal article
Subject
Adolescent
Cues
Female
Forecasting
Humans
Imagination
Life Change Events
Male
Memory, Episodic
Stress Disorders, Post-Traumatic
Young Adult
Permalink
https://hdl.handle.net/10161/9754
Published Version (Please cite this version)
10.1037/a0032638
Publication Info
Rubin, David C (2014). Schema-driven construction of future autobiographical traumatic events: the future is much more troubling than the past. J Exp Psychol Gen, 143(2). pp. 612-630. 10.1037/a0032638. Retrieved from https://hdl.handle.net/10161/9754.
This is constructed from limited available data and may be imprecise. To cite this article, please review & use the official citation provided by the journal.
Collections
More Info
Show full item record