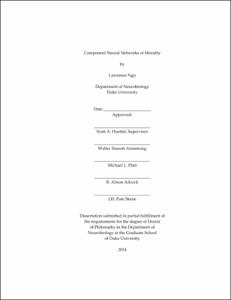 Moral cognition represents a foundational faculty of the human species. Our sense of morality develops beginning at a very young age, and its dysfunction can lead to devastating mental disorders. Given its central importance, it has fittingly garnered the attention of thinkers throughout the ages. For millennia, philosophers have pondered what it is to be right or wrong, good or bad, virtuous or vicious. For centuries, psychologists have elucidated how people acquire and act upon a sense of morality. More recently in the last decade, neuroscientists have embarked on a project to study how morality arises from computations in the brain. However, this latest project has been fragmented: researchers have largely studied various neural components of morality - including emotion, value, and mentalizing - in isolation. This has resulted in an informal and disjointed model for the neural mechanisms of morality. This dissertation is concerned with more formally identifying neural components and their influences on each other in the context of moral cognition.

In Chapter 2, I study how the component neural networks of moral cognition may be involved in distinct aspects of a single decision by employing a complex clinical decision making task involving the disclosure of conflicts of interest. I show that for a given decision, the magnitude of conflict of interest is tracked by mentalizing networks, while the degree of disclosure-induced behavioral change exhibited by participants is predicted by value networks. In Chapter 3, I move beyond the informal model of morality used in Chapter 2 and previous literature by devising a methodology to identify hierarchical ontologies of neural circuits; such an approach can have implications on further discussions of morality, and more generally, on other aspects of cognitive neuroscience. From this, I present the 50 elemental neural circuits that are fundamental to human cognition and explore how these elements can differentially combine to form emergent neural circuits. In Chapter 4, I use these advances to address morality, uncovering its relevant component neural networks in a data-driven way. I show that neural circuits important in supporting higher-level moral computations include mentalizing and taste. In Chapter 5, I demonstrate an important complexity in a compositional model of morality. I show that one of the components of moral cognition, mentalizing, can paradoxically be influenced by moral judgments themselves. To conclude, I highlight the implications of both theoretical and methodological advances. The hierarchical ontologies of neural circuits may be a profitable framework for the future characterization and study of mental disorders; and to effectively study these circuits, the use of moral judgment and decision-making paradigms will be effective experimental tasks, considering the centrality of moral cognition to who we are, whether in health or illness.