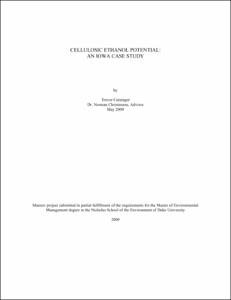 View / Download
2.0 Mb
Date
Author
Cutsinger, Trevor
Advisor
Christensen, Norman
Repository Usage Stats
755
views
724
downloads
Abstract
The many arguments against corn ethanol in recent years coupled with rising energy prices and concern over greenhouse gas emissions have sparked a surge of interest in cellulosic ethanol. From a simplistic point of view, cellulosic ethanol can be derived from anything containing cellulose. A wide variety of biomass residues and dedicated energy crops are the most likely source of large quantities of feedstock. While none of the feedstocks for cellulosic ethanol contribute directly to the “food versus fuel” debate, the obstacles to the large-scale production of this energy source are significant. Many technologies are being explored for the conversion of the various feedstocks into cellulosic ethanol, with the jury still out on which processes are the most energy and cost efficient. In this masters project, the state of Iowa is analyzed as a case study, in order to understand the relationship between marginal agricultural land, the Conservation Reserve Program (CRP), and potential cellulosic ethanol feedstock production. The sample counties were chosen based on their 2007 CRP enrollment acreage. The ten counties with the highest CRP acreage and the ten counties with the lowest CRP acreage were included in the analysis. The logic behind this decision is based on the fact that higher CRP acreage is generally indicative of poorer quality farmland, including steeply sloping land, highly erodible soils, rocky soils, and riparian areas. The next step was to identify marginal agricultural lands in these counties, which was done using the Land Capability Classification system. This system ranks land on a scale of 1 to 8, with 1 being the best farmland and 8 being the most limited. In this case study, all land in category 4 and higher is considered marginal. The land cover on these marginal lands was then analyzed, with particular attention paid to corn. The primary conclusion reached in this project is that a substantial amount of marginal land in Iowa is planted in corn and other row crops. These lands could be better utilized, both environmentally and economically, by instead planting them in switchgrass or other perennial grasses for cellulosic ethanol production.
Type
Master's project
Department
Nicholas School of the Environment and Earth Sciences
Subject
cellulosic ethanol
land capability classification
Iowa
Conservation Reserve Program
Permalink
https://hdl.handle.net/10161/979
Citation
Cutsinger, Trevor (2009). Cellulosic Ethanol Potential: An Iowa Case Study. Master's project, Duke University. Retrieved from https://hdl.handle.net/10161/979.
Collections
More Info
Show full item record