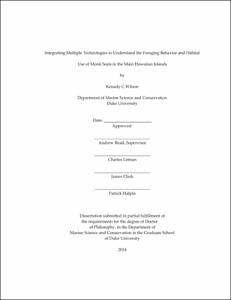 Hawaiian monk seal abundance is currently declining by about 4% per year with current population estimates around 1,100 individuals. Although the overall population continues to decline, a small sub-population in the main Hawaiian Islands (MHI) appears to be increasing by roughly 6% per year. Monk seal conservation and recovery efforts in the MHI have been hindered by the perception that seals do not belong there, and that they compete with fisheries and damage coral reefs. Education and outreach efforts describing the actual impact of monk seals in the MHI are currently underway, but we actually know very little about their at-sea behavior, especially in the MHI, even though Hawaiian monk seals have been studied extensively since the 1980s. The central objective of my dissertation was to describe monk seal behavior and develop a baseline for monk seal foraging ecology and habitat use in the MHI. To accomplish this I combined three-axis accelerometers, National Geographic Crittercams, and GPS tags to study monk seal foraging behavior. I instrumented 16 seals between 2010 and 2014 on the islands of Molokai, Kauai, and Oahu and deployed an additional 24 GPS tags without the accelerometer and Crittercam. I recovered each Crittercam/accelerometer package 3-6 days after deployment, resulting in an average of 6.14 hours of video footage per seal. The GPS tags continued to record data for 3-6 months providing long-term summaries of dive and haul-out behavior. Using a Bayesian framework I modeled monk seal behavior and habitat use, and developed a method to identify feeding events from accelerometer data. There was a high level of individual variation in the movements of monk seals, but general descriptions of their behavior were accurate at the population level. On average, foraging trips lasted 0.81 ± 1.38 days and seals traveled 28.45 ± 82.03 km per trip. Most seals began benthic dives shortly after entering the water, with most dives occurring between 20-40 m. I used kernel density estimation to define the 50% (core area) and 95% (home range) utilization distribution for each seal. The median home range and core area size for seals in the MHI was 265.62 km2 and 1,564.56 km2, respectively. The pitch axis of the accelerometer was a reliable metric, with over 70% accuracy, for identifying foraging events for monk seals. Body motion over the course of a dive, and how close the seal was to the seafloor during a dive (dive ratio) were the best predictors of these foraging events. Consequently, dive ratio was used to infer foraging in long-term telemetry records that lacked concurrent accelerometer data. Analysis of these data relative to habitat preferences revealed two distinct movement modes for monk seals in the MHI: near shore and offshore/inter-island. My research developed the first thorough understanding of monk seal movements and habitat use in the MHI and provided insight into the mechanisms contributing to the behavioral variability observed for this species. I hope that a detailed understanding of the foraging behavior of monk seals will provide insight into their true role in the ecosystem and help foster the recovery of this critically endangered species.