Functional Integration of the Hominin Forelimb 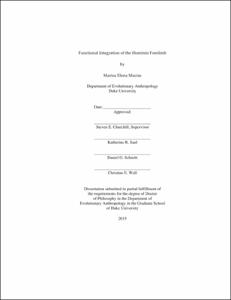 During the last six million years, humans shifted from a primarily arboreal lifestyle to a habitually bipedal, terrestrial lifestyle. Australopithecus had a significant bipedal component to its locomotion; whether suspensory and climbing behavior were also important has remained unclear. Morphological features of the forelimb have been linked to locomotor differences among primates, but the interpretation of human fossils has remained problematic.

This dissertation examined the total morphological pattern of the forelimb, specifically the functional integration of the musculature and joint systems. This approach employed both geometric morphometrics and a biomechanical modeling approach to studying how and how well the forelimb morphology of living suspensory and quadrupedal primates, as well as humans and fossil hominins, accommodate climbing and suspensory locomotion. Data collected with a microscribe 3-D digitizer on the scapula, humerus, radius, and ulna of Australopithecus sediba, Australopithecus afarensis, and Homo erectus were compared to a sample of Homo sapiens, Pan troglodytes, Pan paniscus, Gorilla gorilla, Pongo pygmaeus, Hylobates lar, and Macaca fuscicularis.

The hominin upper limb is a rich mosaic of primitive and derived traits. The blade of Australopithecus sediba, although appearing most similar to extant orangutans, is in fact functionally most similar to chimpanzees. The overall morphology of the australopith elbow joint appears most similar to Pan, as does the elbow joint of Homo erectus, suggesting that the modern human configuration happened more recently than 1.5 million years ago.

Au. afarensis and Au. sediba share important similarities, but are clearly distinct species. While their overall elbow joint shape is strikingly similar, the articular surface is not identical. Au. afarensis is more similar in this respect to Pan and Homo, while Au. sediba is more similar to extant taxa that spend substantially more time engaging in vertical climbing and suspensory behavior.

The results from this study support previous interpretations that not all australopiths across time were employing the same locomotor repertoire. While this study does not present unambiguous conclusions regarding early hominin arboreal locomotion, this study suggests that the morphology of the upper limb is varied, and caution must be taken when interpreting single skeletal elements in the hominin fossil record.