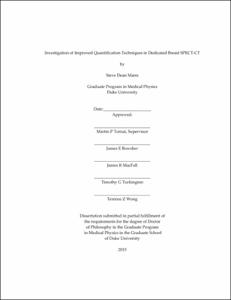 The work presented in this dissertation focuses on evaluation of absolute quantification accuracy in dedicated breast SPECT-CT. The overall goal was to investigate through simulations and measurements the impact and utilization of various correction methods for scattered and attenuated photons, characterization of incomplete charge collection in Cadmium Zinc Telluride detectors as a surrogate means of improving scatter correction, and resolution recovery methods for modeling collimator blur during image reconstruction. The quantification accuracy of attenuation coefficients in CT reconstructions was evaluated in geometric phantoms, and a slice-by-slice breast segmentation algorithm was developed to separate adipose and glandular tissue. All correction and segmentation methods were then applied to a pilot study imaging parathyroid patients to determine the average uptake of Tc-99m Sestamibi in healthy breast tissue, including tissue specific uptake in adipose and glandular tissue.

Monte Carlo methods were utilized to examine the changes in incident scatter energy distribution on the SPECT detector as a function of 3D detector position about a pendant breast geometry. A simulated prone breast geometry with torso, heart, and liver was designed. An ideal detector was positioned at various azimuthal and tilted positions to mimic the capabilities of the breast SPECT subsystem. The limited near-photopeak scatter energy range in simulated spectra was linearly fit and the slope used to characterize changes in scatter distribution as a function of detector position. Results show that the detected scatter distribution changes with detector tilt, with increasing incidence of high energy scattered photons at larger detector tilts. However, reconstructions of various simulated trajectories show minimal impact on quantification (<5%) compared to a primary-only reconstruction.

Two scatter compensation methods were investigated and compared to a narrow photopeak-only windowing for quantification accuracy in large uniform regions and small, regional uptake areas: 1) a narrow ±4% photopeak energy window to minimize scatter in the photopeak window, 2) the previously calibrated dual-energy window scatter correction method, and 3) a modified dual-energy window correction method that attempts to account for the effects of incomplete charge collection in Cadmium Zinc Telluride detectors. Various cylindrical phantoms, including those with imbedded hot and cold regions, were evaluated. Results show that the Photopeak-only and DEW methods yield reasonable quantification accuracy (within 10%) for a wide range of activity concentrations and phantom configurations. The mDEW demonstrated highly accurate quantification measurements in large, uniform regions with improved uniformity compared to the DEW method. However, the mDEW method is susceptible to the calibration parameters and the activity concentration of the scanned phantom. The sensitivity of the mDEW to these factors makes it a poor choice for robust quantification applications. Thus, the DEW method using a high-performance CZT gamma camera is still a better choice for quantification purposes

Phantoms studies were performed to investigate the application of SPECT vs CT attenuation correction. Minor differences were observed between SPECT and CT maps when assuming a uniformly filled phantom with the attenuation coefficient of water, except when the SPECT attenuation map volume was significantly larger than the CT volume. Material specific attenuation coefficients reduce the corresponding measured activity concentrations compared to a water-only correction, but the results do not appear more accurate than a water-only attenuation map. Investigations on the impact of image registration show that accurate registration is necessary for absolute quantification, with errors up to 14% observed for 1.5cm shifts.

Finally, a clinical pilot study was initiated to measure the average uptake of Tc-99m Sestamibi in healthy breast tissue. Subjects were consented from those undergoing diagnostic parathyroid studies at Duke. Each subject was injected with 25mCi of Sestamibi as part of their pre-surgical parathyroid SPECT imaging studies and scanned with the dedicated breast SPECT-CT system before their diagnostic parathyroid SPECT scan. Based on phantom studies of CT reconstructed attenuation coefficient accuracy, a slice-by-slice segmentation algorithm was developed to separate breast CT data into adipose and glandular tissue. SPECT data were scatter, attenuation, and decay corrected to the time of injection. Segmented CT images were used to measure average radiotracer concentration in the whole breast, as well as adipose and glandular tissue. With 8 subjects scanned, the average measured whole breast activity concentration was found to be 0.10µCi/mL. No significant differences were seen between adipose and glandular tissue uptake.

In conclusion, the application of various characterization and correct methods for quantitative SPECT imaging were investigated. Changes in detected scatter distribution appear to have minimal impact on quantification, and characterization of low-energy tailing for a modified scatter subtraction method yields inferior overall quantification results. Comparable quantification accuracy is seen with SPECT and CT-based attenuation maps, assuming the SPECT-based volume is fairly accurate. In general, resolution recovery within OSEM yields higher contrast, but quantification accuracy appears more susceptible to measurement location. Finally, scatter, attenuation, and resolution recovery methods, along with a breast segmentation algorithm, were implemented in a clinical imaging study for quantifying Tc-99m Sestamibi uptake. While the average whole breast uptake was measured to be 0. 10µCi/mL, no significant differences were seen between adipose and glandular tissue or when implementing resolution recovery. Thus, for future clinical imaging, it's recommended that the application of the investigated correction methods should be limited to the traditional DEW method and CT-based attenuation maps for quantification studies.