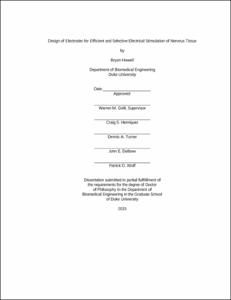 Modulation of neural activity with electrical stimulation is a widespread therapy for treating neurological disorders and diseases. Two notable applications that have had striking clinical success are deep brain stimulation (DBS) for the treatment of movement disorders (e.g., Parkinson's disease) and spinal cord stimulation (SCS) for the treatment of chronic low back and limb pain. In these therapies, the battery life of the stimulators is much less than the required duration of treatment, requiring patients to undergo repeated battery replacement surgeries, which are costly and obligate them to incur repeatedly the risks associated with surgery. Further, deviations in lead position of 2-3 mm can preclude some or all potential clinical benefits, and in some cases, generate side-effects by stimulation of non-target regions. Therefore, despite the success of DBS and SCS, their efficiency and ability to activate target neural elements over non-target elements, termed selectivity, are inadequate and need improvement.

We combined computational models of volume conduction in the brain and spine with cable models of neurons to design novel electrode configurations for efficient and selective electrical stimulation of nervous tissue. We measured the efficiency and selectivity of prototype electrode designs in vitro and in vivo. Stimulation efficiency was increased by increasing electrode area and/or perimeter, but the effect of increasing perimeter was not as pronounced as increasing area. Cylindrical electrodes with aspect (height to diameter) ratios of > 5 were the most efficient for stimulating neural elements oriented perpendicular to the axis of the electrode, whereas electrodes with aspect ratios of < 2 were the most efficient for stimulating parallel neural elements.

Advancing our understanding of the features of electrode geometry that are important for increasing stimulation efficiency and selectivity facilitates the design of the next generation of stimulation electrodes for the brain and spinal cord. Increased stimulation efficiency will increase the battery life of IPGs, increase the recharge interval of rechargeable IPGs, and potentially reduce stimulator volume. Greater selectivity may improve the success rate of DBS and SCS by mitigating the sensitivity of clinical outcomes to malpositioning of the electrode.