Elite Politics and Inequality: The Development of Fiscal Capacity in Authoritarian Regimes 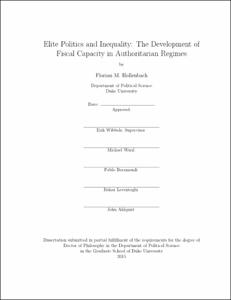 The ability to raise revenue is one of the most fundamental requirements for state- hood. Without revenues, states are unable to perform even the most basic tasks. In this dissertation I aim to answer the question: When do authoritarian elites in- vest in fiscal capacity? First, I develop a theoretical argument using computational modeling techniques. I contend that inequality increases the costs associated with higher fiscal capacity due to a possible regime change in the future. On the other hand, elite demand for government spending can raise the incentives for autocrats to increase the tax capacity of the state. Complimentarity between elite-owned capital and government investment can lead to a demand for higher taxation. Based on their personal utility associated with government spending, elites weigh the current benefit of higher tax capacity with possible future costs.

I then test the overarching theoretical argument across two different datasets. First, I empirically investigate the question on a sample of over 90 authoritarian regimes from 1980 to 2006. Estimating a number of different models and including a variety of controls, I find that inequality has a strong negative long term effect on fiscal capacity. On the other hand, more industrial countries have higher levels of capacity. In the second empirical chapter, I investigate the theoretical argument on newly collected data on tax revenue and administrative spending in local Prussian counties in the 19th century. Again, I find that local inequality has strong negative effects, while more industrial areas are associated with higher levels of fiscal capacity.