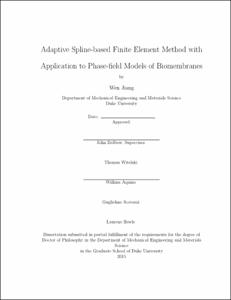 A key challenge while employing B-spline basis functions in finite-element methods is the robust imposition of Dirichlet boundary conditions. We begin by examining weak enforcement of such conditions for B-spline basis functions, with application to both second- and fourth-order problems based on Nitsche's approach. The use of spline-based finite elements is further examined along with a Nitsche technique for enforcing constraints on an embedded interface. We show that how the choice of weights and stabilization parameters in the Nitsche consistency terms has a great influence on the accuracy and robustness of the method. In the presence of curved interface, to obtain optimal rates of convergence we employ a hierarchical local refinement approach to improve the geometrical representation of interface.

In multiple dimensions, a spline basis is obtained as a tensor product of the one-dimensional basis. This necessitates a rectangular grid that cannot be refined locally in regions of embedded interfaces. To address this issue, we develop an adaptive spline-based finite element method that employs hierarchical refinement and coarsening techniques. The process of refinement and coarsening guarantees linear independence and remains the regularity of the basis functions. We further propose an efficient data transfer algorithm during both refinement and coarsening which yields to accurate results.

The adaptive approach is applied to vesicle modeling which allows three-dimensional simulation to proceed efficiently. In this work, we employ a continuum approach to model the evolution of microdomains on the surface of Giant Unilamellar Vesicles. The chemical energy is described by a Cahn-Hilliard type density functional that characterizes the line energy between domains of different species. The generalized Canham-Helfrich-Evans model provides a description of the mechanical energy of the vesicle membrane. This coupled model is cast in a diffuse-interface form using the phase-field framework. The effect of coupling is seen through several numerical examples of domain formation coupled to vesicle shape changes.