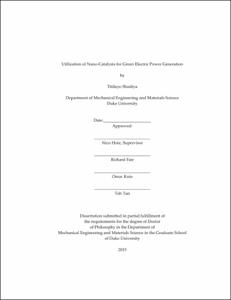 Nano-structures were investigated for the advancement of energy conversion technology because of their enhanced catalytic, thermal, and physiochemical interfacial properties and increased solar absorption. Hydrogen is a widely investigated and proven fuel and energy carrier for promising "green" technologies such as fuel cells. Difficulties involving storage, transport, and availability remain challenges that inhibit the widespread use of hydrogen fuel. For these reasons, in-situ hydrogen production has been at the forefront of research in the renewable and sustainable energy field. A common approach for hydrogen generation is the reforming of alcoholic and hydrocarbon fuels from fossil and renewable sources to a hydrogen-rich gas mixture.

Unfortunately, an intrinsic byproduct of any fuel reforming reaction is toxic and highly reactive CO, which has to be removed before the hydrogen gas can be used in fuel cells or delicate chemical processes. In this work, Au/alpha-Fe2O3 catalyst was synthesized using a modified co-precipitation method to generate an inverse catalyst model. The effects of introducing CO2 and H2O during preferential oxidation (PROX) of CO were investigated. For realistic conditions of (bio-)fuel reforming, 24% CO2 and 10% water the highest document conversion, 99.85% was achieved. The mechanism for PROX is not known definitively, however, current literature believes the gold particle size is the key. In contrast, we emphasize the tremendous role of the support particle size. A particle size study was performed to have in depth analysis of the catalysts morphology during synthesis. With this study we were also able to modify how the catalyst was made to further reduce the particle size of the support material leading to ~99.9% conversion. We also showed that the resulting PROX output gas could power a PEM fuel cell with only a 4% drop in power without poisoning the membrane electrode assembly.

The second major aim of this study is to develop an energy-efficient technology that fuses photothermal catalysis and plasmonic phenomena. Although current literature has claimed that the coupling of these technologies is impossible, here we demonstrate the fabrication of reaction cells for plasmon-induced photo-catalytic hydrogen production. The localized nature of the plasmon resonance allows the entire system to remain at ambient temperatures while a high-temperature methanol reformation reaction occurs at the plasmonic sites. Employing a nanostructured plasmonic substrate, we have successfully achieved sufficient thermal excitement (via localized surface plasmon resonance (LSPR)) to facilitate a heterogeneous chemical reaction. The experimental tests demonstrate that hydrogen gas can indeed be generated in a cold reactor, which has never been done before. Additionally, the proposed method has the highest solar absorption out of several variations and significantly reduces the cost, while increasing the efficiency of solar fuels.