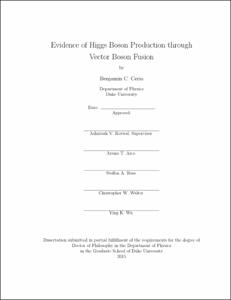 proposed mechanism for preserving the electroweak $SU(2) \times U(1)$

gauge symmetry of the Standard Model of particle physics. It also

heralded in a new era of precision Higgs physics. This thesis presents a

in both the production and decay vertices, a VBF measurement in this

channel is a powerful probe of the $VVH$ vertex strength. Using

detector, measurements of the statistical significance and the signal

200 \gev$. These measurements are enhanced with a boosted decision

tree that exploits the correlations between eight kinematic inputs in

order to separate signal and background processes. At the benchmark

Higgs mass of $125.36 \gev$, the significance of the data assuming the

background-only hypothesis to be true has been observed to be

branching ratio to that predicted by the SM) is

significant deviations from the SM predictions for VBF Higgs boson