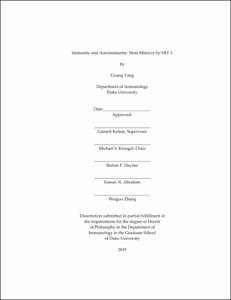 Many human monoclonal antibodies that neutralize multiple clades of HIV-1 are polyreactive and bind avidly to mammalian autoantigens. Indeed, the generation of neutralizing antibodies to the 2F5 and 4E10 epitopes of HIV-1 gp41 in man may be proscribed by immune tolerance since mice expressing the VH and VL of 2F5 have an arrested B-cell development characteristic of central tolerance. This developmental blockade implies the presence of tolerizing autoantigens that mitigate effective humoral responses. I hypothesize that discreet human antigens are mimicked by the membrane-proximal external region (MPER) of HIV-1 gp41, and that such mimicry is a wide-spread strategy for HIV-1 to evade immune attacks to its vulnerable neutralizing epitopes.

In the first part of the study, I propose to identify autoantigens mimicked by the 2F5 and 4E10 epitopes. I used immunoprecipitation coupled with mass spectrometry as well as protein arrays to identify the self-antigens recognized by 2F5 and 4E10. The binding of antigens was confirmed using serological assays and targeted mutagenesis was used to map the binding epitope. We identified human kynureninase (KYNU) and splicing factor 3b subunit 3 (SF3B3) as the primary conserved, vertebrate self-antigens recognized by the 2F5 and 4E10 antibodies, respectively. 2F5 binds the H4 domain of KYNU which contains the complete 2F5 linear epitope (ELDKWA). 4E10 recognizes a conformational epitope of SF3B3 that is strongly dependent on hydrophobic interactions. Opossums carry a rare KYNU H4 domain that abolishes 2F5 binding, but retain all SF3B3 4E10 epitopes. Immunization of opossums with HIV-1 gp140 induced extraordinary titers of serum antibody to the 2F5 ELDKWA epitope but little or nothing to the 4E10 determinant.

Our identification of structural motif shared by vertebrates and HIV-1 provides direct evidence that immunological tolerance can impair humoral responses to HIV-1. In the second part of the project, I propose to study the mechanisms of immune tolerance to B cells expressing the 2F5 antibodies. To determine the B cell repertoire before and after tolerance checkpoints, I used the Nojima-Kitamura single B-cell culture that supports differentiation into IgG-secreting plasma cells, even autoreactive cells that are normally subject to tolerization in vivo. I found that the pre-tolerance compartment (small pre-B) from 2F5 KI mice are cells that express the 2F5 V(D)J rearrangements and bind HIV-1 gp41, KYNU, and cardiolipin. Mature, post-tolerance B cells from 2F5 KI mice, however, are purged of gp41- and KYNU-reactivity, but retain cardiolipin-binding, and sequence analysis revealed extensive light-chain editing. The anergic B cells in the post-tolerance compartment are enriched with self-reactivity to KYNU and maintain binding to HIV-1 gp41. Our results demonstrate that tolerance of the 2F5 epitope is driven by specific reactivity to KYNU, but not general cross-reactivity to cardiolipin. In addition, that the peripheral anergic B cells retain self-reactivity and binding to HIV-1 gp41 suggests a potential target for activation by immunizations.

Lastly, we sought to determine whether the host mimicry by 4E10 and 2F5 epitopes is also present in other HIV-1 epitopes, including additional conserved neutralizing epitopes and more importantly, non-neutralizing epitopes. We used protein microarrays to assess autoreactivity of HIV-1 broadly neutralizing antibodies (bnAbs) and non-neutralizing antibodies (nnAbs) and found that as a class, bnAbs are more polyreactive and autoreactive than nnAbs. The poly- and autoreactive property is therefore not a result of chronic inflammation, but rather uniquely associated with neutralization, consistent with the role of heteroligation for HIV-1 neutralizing activity. In addition, mutation frequencies of bNAbs and nnAbs per se do not correlate with poly- and autoreactivity. Our results demonstrate that HIV-1 bnAbs are significantly more polyreactive and self-reactive than non-neutralizers, which may subject them to immunological tolerance control in vivo. Infrequent poly- or autoreactivity among nnAbs implies that their dominance in humoral responses is due to the absence of negative control by immune tolerance.

The results of this study indicate that mimicry of host antigens by HIV-1 is an effective mechanism to camouflage vulnerable neutralizing epitopes of HIV-1 and evade host immune responses. As a result, protective HIV-1 bnAbs are rare and often poly- or autoreactive, constituting a major hurdle that must be overcome to effectively elicit protective responses by an HIV-1 vaccine.