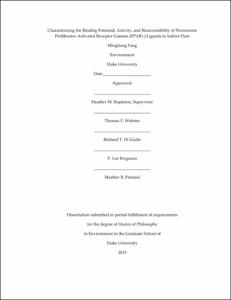 Accumulating evidence is suggesting that exposure to some environmental contaminants may alter adipogenesis, resulting in accumulation of adipocytes, and often significant weight gain. Thus these types of contaminants are often referred to as obesogens. Many of these contaminants act via the activation (i.e. agonism) of the peroxisome proliferator activated receptor &#947; (PPAR&#947;) nuclear receptor. To date, very few chemicals have been identified as possible PPAR&#61543; ligands. In the thesis, our goal was to determine the PPAR&#947; ligand binding potency and activation of several groups of major semi-volatile organic compounds (SVOCs) that are ubiquitously detected in indoor environments, including flame retardants such as polybrominated diphenyl ethers (PBDEs) and Firemaster 550 (FM550), and other SVOCs such as phthalates, organotins, halogenated phenols and bisphenols. Additional attention was also given to the potential activity of the major metabolites of several of these compounds. Since the primary sink for many of these SVOCs is dust, and dust ingestion has been confirmed as an important pathway for SVOCs accumulation in humans, the potential PPAR&#61543; binding and activation in extracts from environmentally relevant dust samples was also investigated.

Previous studies have also shown that SVOCs sorbed to organic matrices (e.g., soil and sediment), were only partially bioaccessible (bioavailable), but it was unclear how bioaccessible these compounds are from indoor dust matrices. In addition, bioactivation of SVOCs (via metabolism) could exacerbate their PPAR&#61543; potency. Therefore, to adequately assess the potential risk of PPAR&#947; activation from exposure to SVOC mixtures in house dust, it is essential that one also investigates the bioaccessibility and bioactivation of these chemicals following ingestion.

In the first research aim of this thesis, the bioaccessibility and bioactivation of several important SVOCs in house dust was investigated. To accomplish this, Tenax beads (TA) encapsulated within a stainless steel insert were used as an infinite adsorption sink to estimate the dynamic absorption of a suite of flame retardants (FRs) commonly detected in indoor dust samples, and from a few polyurethane foam samples for comparison. Experimental results demonstrate that the bioaccessibility and stability of FRs following ingestion varies both by chemical and by matrix. Organophosphate flame retardants (OPFRs) had the highest estimated bioaccessibility (~80%) compared to brominated compounds (e.g. PBDEs), and values generally decreased with increasing Log Kow, with <30% bioaccessibility measured for the most hydrophobic compound tested, BDE209. In addition, the stability of the more labile SVOCs that contained ester groups (e.g. OPFRs and 2-ethylhexyl-tetrabromo-benzoate (TBB)) were examined in a simulated digestive fluid matrix. No significant changes in the OPFR concentrations were observed in this fluid; however, TBB was found to readily hydrolyze to tetrabromobenzoic acid (TBBA) in the intestinal fluid in the presence of lipases.

In research aims 2 and 3, two commercially available high-throughput bioassays, a fluorescence polarization PPAR&#61543; ligand binding assay (PolarScreenTM PPAR&#947;-competitor assay kit, Invitrogen, Aim 2) and a PPAR&#61543; reporter gene assay (GeneBLAzer PPAR&#947; non-DA Assay, Invitrogen, Aim 3) were used to investigate the binding potency and activation of several groups of SVOCs and dust extracts with human PPAR&#947; LBD; respectively. In the PPAR&#61543; binding assay (Aim 2), most of the tested compounds exhibited dose-dependent binding to PPAR&#947;. Mono(2-ethylhexyl) tetrabromophthalate (TB-MEHP), halogenated bisphenol/phenols, triphenyl phosphate and hydroxylated PBDEs were found to be potent or moderate PPAR&#947; ligands, based on the measured ligand binding dissociation constant (Kd). The most potent compound was 3-OH-BDE47, with an IC50 of 0.24 &#956;M. The extent of halogenation and the position of the hydroxyl group strongly affected binding. Of the dust samples tested, 21 of 24 samples showed significant PPAR&#61543; binding potency at a concentration of 3 mg dust equivalents (DEQ)/mL. In the PPAR&#61543; reporter assay (Aim 3), many SVOCs or their metabolites were either confirmed (based on previous reports) or for the first time were found to be potential PPAR&#947; agonists with various potency and efficacy. We also observed that 15 of 25 dust extracts examined showed an activation percentage more than 8% (calculated activation threshold) of the maximal activation induced by rosiglitazone (positive control). In some cases, activation was as high as 50% of the rosiglitazone activation for the dust extracts with the highest efficacy. Furthermore, the correlation between the reporter assay and the ligand binding assay among the house dust extracts was significant and positive (r = 0.7, p < 0.003), suggesting the binding potency was predicting activation. In research aim 2, the effect of bioactivation on the PPAR&#947; binding potency was also investigated. In vitro bioactivation of house dust extracts incubated with rat and human hepatic S9 fractions was used to investigate the role of in vivo biotransformation on PPAR gamma activity. The result showed that metabolism may lead to an increased binding affinity, as a 3-16% increase in PPAR&#947; binding activity was observed following bioactivation of the dust extracts.

In conclusion, this research demonstrates that many SVOCs ubiqutiously detected in house dust, and/or their metabolites, can be weak or moderate PPAR&#61543; ligands. In addition, chemical mixtures in house dust can effectively bind to and activate PPAR&#61543;. However, our results suggest FAs are probably responsible for these observations, and likely outcompeting the synthetic environmental contaminants present in the dust extract. Furthermore, bioactivation of contaminants present in house dust can potentially increase their affinity for PPAR&#61543;. And lastly, the bioaccessibility and stability of SVOCs in house dust after ingestion are likely to modulate the PPAR&#61543; activity in the environmental mixtures and should be considered in future risk assessments.