Multiple roles of epithelial signaling during craniofacial and foregut morphogenesis 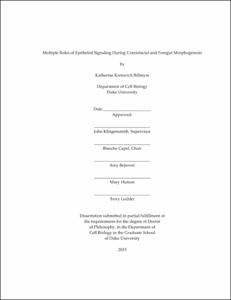 During embryonic development many structures crucial for breathing and eating arise from the pharyngeal and anterior foregut epithelium (FGE), which contains the oral ectoderm and the foregut endoderm. Proper differentiation and signaling within and from this epithelial tissue is necessary for the development of the mandible, the esophagus, and the trachea. Many birth defects occur in these structures that greatly disrupt the ability of affected infants to breathe and eat. This dissertation investigates the importance of the pharyngeal and anterior FGE in mandible and foregut development.

The most rostral portion of the pharyngeal epithelium contributes to the development of the mandible. At embryonic day 10.5 the mandible is a bud structure, composed of neural crest-derived mesenchyme and core mesoderm surrounded by pharyngeal epithelium. The mesenchyme needs to receive Hedgehog signaling for mandible development, but the epithelial tissue that signals to the mesenchyme has not been identified in mammals. Data presented in Chapter 2 show that Sonic Hedgehog is necessary at two distinct stages of mandible development by using a tissue specific genetic ablation to remove Sonic Hedgehog from the pharyngeal endoderm. First, we show that Sonic Hedgehog promotes cell survival prior to cartilage differentiation through immunostaining for Caspase-9, an apoptosis marker. Second, a rescue of early cell death with the p53 inhibitor pifithrin-&#945; shows that Sonic Hedgehog is necessary for cartilage condensation and differentiation later in development. Without cartilage differentiation the mandible is unable to elongate properly and hypoplasia occurs.

Caudal to the pharyngeal epithelium is the anterior FGE, which develops into the larynx, esophagus and trachea. The anterior FGE is a single endodermal tube at E9.5 and by E11.5 compartmentalizes into two distinct tubes: the esophagus and trachea. While the signaling pathways involved in proper compartmentalization of the foregut are well studied, nothing is known about the cellular behaviors that drive this complex event. One important event during foregut compartmentalization is the establishment of dorso-ventral patterning, which is necessary for separation to occur. To elucidate the importance of dorso-ventral patterning, we take advantage of two genetic mouse models with disrupted patterning, an activation of and a removal of &#946;-catenin in the ventral foregut endoderm. Data presented in Chapter 3 show that &#946;-catenin is important for epithelial pseudostratification and the establishment of a region of double-positive cells at the dorso-ventral midline through close examination of epithelial morphogenesis at E10.5 prior to compartmentalization. This data has established two mouse models for studying changes in epithelial morphology during foregut compartmentalization. In total, this body of work details how signals originating in the pharyngeal and anterior foregut epithelium regulate both mesenchymal and epithelial behaviors during mandible and foregut development.