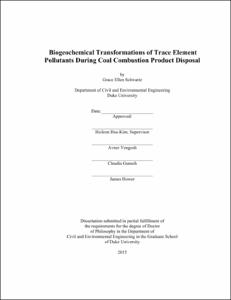 Coal fired power plants generate approximately 45% of the electricity produced in the United States every year, and each year, over 100 million tons of coal ash are produced as a by-product of electricity generation. Coal ash is a solid waste made up principally of bottom ash, fly ash, and flue gas desulfurization materials. The chemical composition of coal ash varies depending on the feed coal source, combustion parameters, and the presence and type of air pollution control devices that remove contaminants from the flue gas into the solid waste stream. Although a significant portion of coal ash waste is recycled, the majority of coal ash is disposed in landfills and holding ponds. Coal ash impoundments have a long history of environmental degradation, which includes: contaminant leaching into groundwater, the discharge of contaminant-laden effluent into surface waters, and catastrophic impoundment failures and ash spills. Despite these known problems, coal ash is not considered a hazardous waste, and thus is not subject to stringent disposal requirements. The current coal ash management system is based on risk assessments of coal ash that do not include environmental parameters that have a profound impact on coal ash contaminant mobility, particularly for the toxic elements such as mercury, arsenic, and selenium. This dissertation research focused on the biogeochemical transformations of mercury, arsenic, and selenium associated with coal ash materials in an effort to: (1) define the key environmental parameters controlling mercury, arsenic, and selenium fate during disposal and ash spills; and (2) delineate the relationship between coal ash characteristics, environmental parameters, and leaching potential.

The impact of coal ash on mercury transformations in anaerobic systems was assessed using anaerobic sediment-ash microcosms to mimic an ash spill into a benthic aquatic system. Anaerobic sediments are the primary zones for the microbial conversion of inorganic mercury to methyl mercury (MeHg), a process that is mediated by anaerobic bacteria, particularly sulfate reducing bacteria (SRB). MeHg is a potent neurotoxin that biomagnifies up the aquatic food chain, presenting a human health risk-- especially to children and pregnant women. The results of the sediment-ash microcosm experiments indicated negligible net production of MeHg in microcosms with no ash and in microcosms amended with the low-sulfate/low-Hg ash. In contrast, microcosms amended with sulfate and mercury-rich ash showed increases in MeHg concentrations that were two to three times greater than control microcosms without ash. The enhancement MeHg production in the microcosms was likely due to large quantities of leachable sulfate that stimulated the activity of methylating bacteria. Overall, these results highlight the importance of considering both the geochemical conditions of the receiving environment and the chemical composition of the coal ash in assessing the MeHg potential of coal ash.

The hypothesis that sulfate-rich coal ash can change sediment microbial communities, enhancing MeHg production, was tested by analyzing coal ash impacts on the SRB community in the sediment-ash microcosms using Terminal Restriction Fragment Length Polymorphism (T-RFLP), Quantitative Polymerase Chain Reaction (q-PCR), and Reverse Transcription-qPCR (RT-qPCR). Coal ash did not appear to cause significant changes to the structure of the overall bacterial community, though results showed that it may have caused a decrease in the evenness for species distribution for both SRB and the overall microbial community. During the five-day incubation experiment, the coal ash had a temporary significant effect on SRB abundance during the first one to two days of the experiment and a more sustained effect on SRB activity. This stimulation of SRB population growth and activity also corresponded with increasing net MeHg production. Overall, results indicate that coal ash amendments do not cause large shifts in the overall microbial community or the SRB community, but results indicate that there are connections between SRB abundance/activity and MeHg production. More research is needed to determine how coal ash directly impacts Hg methylating microorganisms, which include diverse array of microorganisms outside of SRB.

These investigations illuminated two major conclusions: (1) microbial activity and differing redox conditions are key in determining the impact of coal ash on the environment and in determining the mobility of coal ash contaminants, and (2) coal ash characteristics, such as sulfate and iron content, can change the redox chemistry and microbial activity of the surrounding environment, further influencing the fate of ash contaminants. This work will be useful in designing a framework that accurately predicts the leaching potential of ash contaminants under environmentally relevant conditions. The results will also be helpful in developing treatment technologies for ash impoundment effluent, guiding decisions on ash pond closure and remediation, and in designing long-term monitoring plans and remediation strategies for ash-impacted sites.