The Role of Spindle Orientation in Epidermal Development and Homeostasis 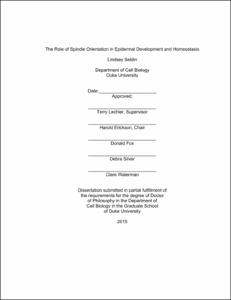 Robust regulation of spindle orientation is essential for driving asymmetric cell divisions (ACDs), which generate cellular diversity within a tissue. During the development of the multilayered mammalian epidermis, mitotic spindle orientation in the proliferative basal cells is crucial not only for dictating daughter cell fate but also for initiating stratification of the entire tissue. A conserved protein complex, including LGN, Nuclear mitotic apparatus (NuMA) and dynein/dynactin, plays a key role in establishing proper spindle orientation during ACDs. Two of these proteins, NuMA and dynein, interact directly with astral microtubules (MTs) that emanate from the mitotic spindle. While the contribution of these MT-binding interactions to spindle orientation remains unclear, these implicate apical NuMA and dynein as strong candidates for the machinery required to transduce pulling forces onto the spindle to drive perpendicular spindle orientation.

In my work, I first investigated the requirements for the cortical recruitment of NuMA and dynein, which had never been thoroughly addressed. I revealed that NuMA is required to recruit the dynein/dynactin complex to the cell cortex of cultured epidermal cells. In addition, I found that interaction with LGN is necessary but not sufficient for cortical NuMA recruitment. This led me to examine the role of additional NuMA-interacting proteins in spindle orientation. Notably, I identified a role for the 4.1 protein family in stabilizing NuMA's association with the cell cortex using a FRAP (fluorescence recovery after photobleaching)-based approach. I also showed that NuMA's spindle orientation activity is perturbed in the absence of 4.1 interactions. This effect was demonstrated in culture using both a cortical NuMA/spindle alignment assay as well as a cell stretch assay. Interestingly, I also noted a significant increase in cortical NuMA localization as cells enter anaphase. I found that inhibition of Cdk1 or mutation of a single residue on NuMA mimics this effect. I also revealed that this anaphase localization is independent of LGN and 4.1 interactions, thus revealing two independent mechanisms responsible for NuMA cortical recruitment at different stages of mitosis.

After gaining a deeper understanding of how NuMA is recruited and stabilized at the cell cortex, I then sought to investigate how cortical NuMA functions during spindle orientation. NuMA contains binding domains in its N- and C-termini that facilitate its interactions with the molecular motor dynein and MTs, respectively. In addition to its known role in recruiting dynein, I was interested in determining whether NuMA's ability to interact directly with MTs was critical for its function in spindle orientation. Surprisingly, I revealed that direct interactions between NuMA and MTs are required for spindle orientation in cultured keratinocytes. I also discovered that NuMA can specifically interact with MT ends and remain attached to depolymerizing MTs. To test the role of NuMA/MT interactions in vivo, I generated mice with an epidermal-specific in-frame deletion of the NuMA MT-binding domain. I determined that this deletion causes randomization of spindle orientation in vivo, resulting in defective epidermal differentiation and barrier formation, as well as neonatal lethality. In addition, conditional deletion of the NuMA MT-binding domain in adult mice results in severe hair growth defects. I found that NuMA is required for proper spindle positioning in hair follicle matrix cells and that differentiation of matrix-derived progeny is disrupted when NuMA is mutated, thus revealing an essential role for spindle orientation in hair morphogenesis. Finally, I discovered hyperproliferative regions in the interfollicular epidermis of these adult mutant mice, which is consistent with a loss of ACDs and perturbed differentiation. Based on these data, I propose a novel mechanism for force generation during spindle positioning whereby cortically-tethered NuMA plays a critical dynein-independent role in coupling MT depolymerization energy with cortical tethering to promote robust spindle orientation accuracy.

Taken together, my work highlights the complexity of NuMA localization and demonstrates the importance of NuMA cortical stability for productive force generation during spindle orientation. In addition, my findings validate the direct role of NuMA in spindle positioning and reveal that spindle orientation is used reiteratively in multiple distinct cell populations during epidermal morphogenesis and homeostasis.