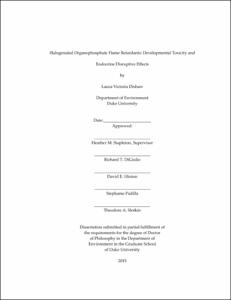 Following the phase out of polybrominated diphenyl ethers (PBDEs), manufacturers turned to several alternative flame retardants (FRs) to meet flammability standards. Organophosphate FRs (OPFRs), and in particular tris (1,3-dichloropropyl) phosphate (TDCPP), have been increasingly detected in textiles and foam padding used in a variety of consumer products including camping equipment, upholstered furniture, and baby products. Like PBDEs, OPFRs are additive, meaning that they are not chemically bound to the treated material and can more readily leach out into the surrounding environment. Indeed, OPFRs have been detected in numerous environmental and biological matrices, often at concentrations similar to or exceeding that of PBDEs.

Although OPFRs have been in use for several decades, relatively little is known regarding their potential for adverse human and environmental health consequences. However, based on their structural similarity to OP pesticides, they may have analogous mechanisms of toxicity. OP pesticide toxicity is classically associated with cholinesterase inhibition, resulting in cholinergic intoxication syndrome. OPFRs have been shown to be ineffective cholinesterase inhibitors, however chlorpyrifos (CPF) and other OP pesticides have been shown to elicit adverse effects on developing organisms through other mechanisms.

The main objective of this research project was to evaluate the toxicity of four structurally similar OPFRs (TDCPP; tris (2,3-dibromopropyl) phosphate, (TDBPP); tris (1-chloropropyl) phosphate (TCPP) and tris (2-chloroethyl) phosphate (TCEP)) in comparison to chlorpyrifos (CPF), a well-studied OP pesticide. A combination of in vitro and in vivo models was used to elucidate potential mechanisms as well as functional consequences of exposure in developing organisms.

In the first research aim, a series of in vitro experiments with neurotypic PC12 cells was used to evaluate the effects of four structurally similar OPFRs (TDCPP, TDBPP, TCEP, or TCPP) and CPF on neurodevelopment. The effects of TDCPP were also compared to that of BDE-47, a major component of the commercial PentaBDE mixture. In general, TDCPP elicited similar or greater effects when compared to an equimolar concentration of CPF. All OPFRs tested produced similar decrements in cell number and altered phenotypic differentiation, while BDE-47 had no effect on cell number, cell growth, or neurite growth.

For the second research aim, zebrafish (Danio rerio) were used to evaluate the effects of the same suite of chemicals on early development. TDCPP, TDBPP, and CPF elicited overt toxicity (e.g., malformations or death) within the concentration range tested (0.033-100 µM). TDBPP was the most potent with 100% mortality by 6 days post fertilization (dpf) at &#8805;3.3 µM. CPF and TDCPP showed equivalent toxicity with malformations observed in at 10 µM and significant mortality (&#8805;75%) at &#8805;33 µM. There was no overt toxicity among TCEP- and TCPP-exposed fish. All test chemicals affected larval swimming behavior on 6 dpf at concentrations below the overt toxicity threshold. Parent chemical was detected in all in embryonic (1 dpf) and larval (5 dpf) tissues. TDCPP and TDBPP showed rapid and extensive metabolism.

Finally, for the third aim, juvenile (45-55 dpf) zebrafish were exposed to CPF (1 µg/g food) or TDCPP (Low TDCPP = 1 µg/g food; High TDCPP = 40 µg/g food) via diet for 28 days followed by a 7 day depuration period where all treatments received clean food. A dietary exposure was chosen to more closely recapitulate exposure in humans. Samples were collected at seven time points throughout the experiment: days 0, 7, 14, 21, 28, 30, 35. Whole tissues were collected for tissue accumulation and histopathology endpoints. Viscera and brain were dissected and flash frozen separately for DNA damage analyses.

Tissue measurements of CPF, TDCPP, and the metabolite bis (1,3-dichloropropyl) phosphate (BDCPP) were often below the method detection limit, however when present there was a trend towards increased accumulation with treatment and time. On Day 7 Low TDCPP caused a dramatic but transient increase in DNA damage in both viscera and brain that returned to control levels by Day 14. Similar results have been seen previously with other genotoxicants and may be due to CPF and High TDCPP inducing an adaptive response prior to the 7 day sampling point. All treatments shifted the neurohypophysis to adenohypophysis ratio (NH/AH; Day 7 only) and significantly increased thyroid follicle activation (Day 14). Finally High TDCPP affected gonad maturation, causing a significant increase in ovary follicle development (Day 14) and a transient but marked decrease in testes maturity (Day 7). Taken together these data suggest that dietary exposure to TDCPP and CPF elicits DNA damage in brain and viscera and alters endocrine function in juvenile zebrafish. Importantly, analyses were restricted to the first three time points (Days 0, 7, and 14) due to the emergence a disease among the experimental colony. Although these samples were collected prior to the disease becoming apparent, it remains a potential confounder of the current results.