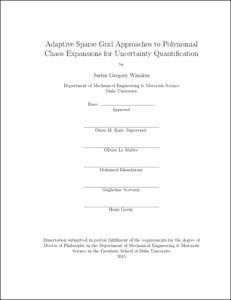 Polynomial chaos expansions provide an efficient and robust framework to analyze and quantify uncertainty in computational models. This dissertation explores the use of adaptive sparse grids to reduce the computational cost of determining a polynomial model surrogate while examining and implementing new adaptive techniques.

Determination of chaos coefficients using traditional tensor product quadrature suffers the so-called curse of dimensionality, where the number of model evaluations scales exponentially with dimension. Previous work used a sparse Smolyak quadrature to temper this dimensional scaling, and was applied successfully to an expensive Ocean General Circulation Model, HYCOM during the September 2004 passing of Hurricane Ivan through the Gulf of Mexico. Results from this investigation suggested that adaptivity could yield great gains in efficiency. However, efforts at adaptivity are hampered by quadrature accuracy requirements.

We explore the implementation of a novel adaptive strategy to design sparse ensembles of oceanic simulations suitable for constructing polynomial chaos surrogates. We use a recently developed adaptive pseudo-spectral projection (aPSP) algorithm that is based on a direct application of Smolyak's sparse grid formula, and that allows for the use of arbitrary admissible sparse grids. Such a construction ameliorates the severe restrictions posed by insufficient quadrature accuracy. The adaptive algorithm is tested using an existing simulation database of the HYCOM model during Hurricane Ivan. The {\it a priori} tests demonstrate that sparse and adaptive pseudo-spectral constructions lead to substantial savings over isotropic sparse sampling.

In order to provide a finer degree of resolution control along two distinct subsets of model parameters, we investigate two methods to build polynomial approximations. The two approaches are based with pseudo-spectral projection (PSP) methods on adaptively constructed sparse grids. The control of the error along different subsets of parameters may be needed in the case of a model depending on uncertain parameters and deterministic design variables. We first consider a nested approach where an independent adaptive sparse grid pseudo-spectral projection is performed along the first set of directions only, and at each point a sparse grid is constructed adaptively in the second set of directions. We then consider the application of aPSP in the space of all parameters, and introduce directional refinement criteria to provide a tighter control of the projection error along individual dimensions. Specifically, we use a Sobol decomposition of the projection surpluses to tune the sparse grid adaptation. The behavior and performance of the two approaches are compared for a simple two-dimensional test problem and for a shock-tube ignition model involving 22 uncertain parameters and 3 design parameters. The numerical experiments indicate that whereas both methods provide effective means for tuning the quality of the representation along distinct subsets of parameters, adaptive PSP in the global parameter space generally requires fewer model evaluations than the nested approach to achieve similar projection error.

In order to increase efficiency even further, a subsampling technique is developed to allow for local adaptivity within the aPSP algorithm. The local refinement is achieved by exploiting the hierarchical nature of nested quadrature grids to determine regions of estimated convergence. In order to achieve global representations with local refinement, synthesized model data from a lower order projection is used for the final projection. The final subsampled grid was also tested with two more robust, sparse projection techniques including compressed sensing and hybrid least-angle-regression. These methods are evaluated on two sample test functions and then as an {\it a priori} analysis of the HYCOM simulations and the shock-tube ignition model investigated earlier. Small but non-trivial efficiency gains were found in some cases and in others, a large reduction in model evaluations with only a small loss of model fidelity was realized. Further extensions and capabilities are recommended for future investigations.